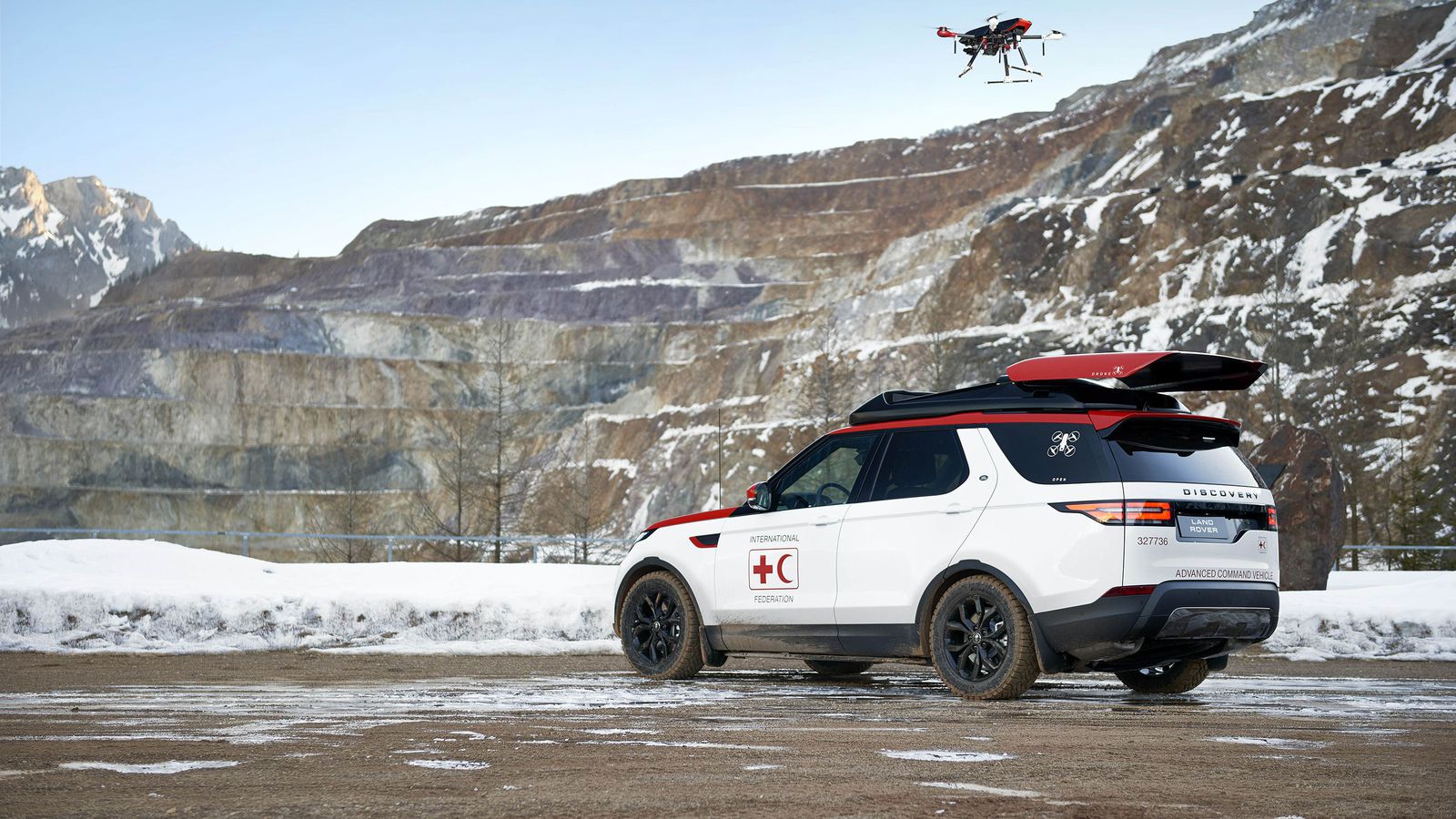 Land Rover Discovery Project Hero was introduced to the world for the first time at the Geneva Motor Show 2017, last week.

The vehicle has been specially designed in collaboration with the Red Cross emergency experts, to perform humanitarian work and aims to speed up response times to disaster-struck locations.

This vehicle release builds on the company’s long-standing partnership, exactly 63 years, in which they have been working together to save lives across the globe.

This unique version of the Discovery is being called ‘Project Hero’ and includes a roof-mounted drone can be deployed while the vehicle is in transit.

The search and rescue drone can travel up to 1km for 20 minutes and reach speeds of over 30mph, to relay live footage to emergency response teams, allowing rescuers to investigate an emergency scene safely, and to rapidly assess damage, hazards and the condition of people who need help.

The vehicle functions as a fully-equipped mobile command unit, with storage for emergency supplies and an interior that can be reconfigured for a stretcher and other needs.

The vehicle and drone will be trialed for a year by Austrian Red Cross emergency response teams in simulations and test-runs, as well as real-time responses to accidents, landslides, avalanches, floods and other disasters that occur in Austria’s mountainous Eisenerz region.

“Land Rover’s innovative use of emerging technology combined with Red Cross and Red Crescent expertise and access to at-risk communities will hopefully lead to more rapid and effective humanitarian action and ultimately more lives saved,” says Dr Jemilah Mahmood, IFRC Under Secretary General for Partnerships. “We’re grateful to Land Rover for 63 years of support. It’s a partnership that has transformed the lives of countless people around the world.”

Since it began in 1954, the relationship between Land Rover and the IFRC has grown into a global strategic partnership that now involves projects in 25 countries.

“Land Rover and the team of engineers and designers at Special Vehicle Operations are proud to support the incredible humanitarian work of the IFRC and its members,” says John Edwards, Jaguar Land Rover Special Operations Managing Director. “The new Discovery is the world’s most capable all-terrain SUV, and Project Hero is the optimum combination of enhanced capability and innovative technology. We hope to help the Red Cross save more lives in emergency situations.”

Over the years Land Rover has provided over 120 vehicles to the International Red Cross but the latest off the production line is arguably the most advanced yet.