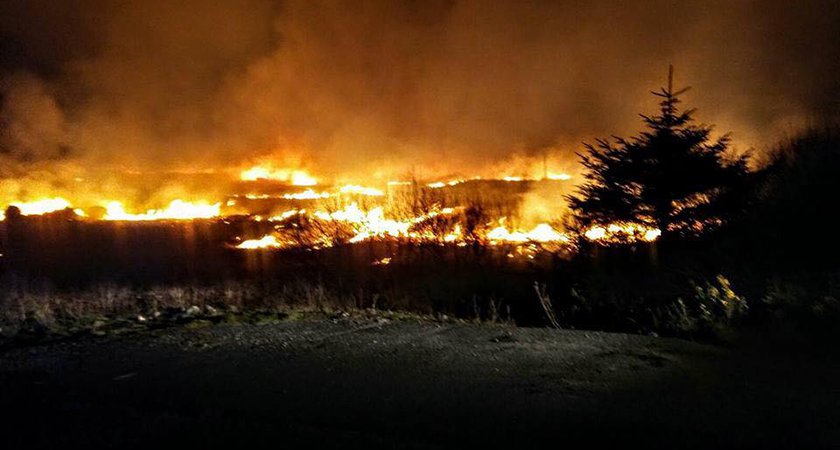 Efforts have resumed this morning to bring the blaze at Cloosh Valley in Connemara under control with more than a third of the country’s biggest forest destroyed by the fire so far.

Cloosh Valley is Ireland’s largest forest at over 4,000 hectares.

Coillte staff, the fire service, the army and the Air Corps have been battling to bring the blaze under control for several days now.

The Army has been deployed with beaters to beat back the massive forest fire which has destroyed over a third of the forest at Cloosh Valley in Galway.

Coillte and Air Corps helicopters are being used to fight the blaze, one is directing operations and the other is using bambi buckets to douse the land.

Firefighters are working to try to protect homes in the area and are currently working on three separate fronts on the ground.

The fire is visible from Galway city and there is even a smell of burning, although the site is 20 miles away.

Coillte said it believed the destruction was triggered by a deliberately set gorse fires, which then spread onto its lands.

In a statement yesterday, government ministers reminded land owners that it’s an offence to burn any vegetation growing on any land not cultivated between 1 March and 31 August every year.

Coillte has said it is battling fires on its land at 30 locations in Leitrim, Roscommon, Mayo and Cavan.

A combination of dry weather, dry vegetation and windy conditions have led to an increased risk of gorse and forest fires in recent weeks.
According to Met Éireann, the dry spell is set to break tomorrow.

Due to the ongoing Forest Fires at Cloosh Valley Moycullen, Co. Galway, Gardai in Galway have asked members of the public to refrain from entering the Cloosh Valley area as persons and vehicles entering the area, are posing difficulty for the Emergency Services.

In particular the Seanafeastin Road should be avoided except for Emergency vehicles and local residents as it is dangerous to enter and there is a possibility of becoming trapped.