What Is R0?: Gauging Contagious Infections 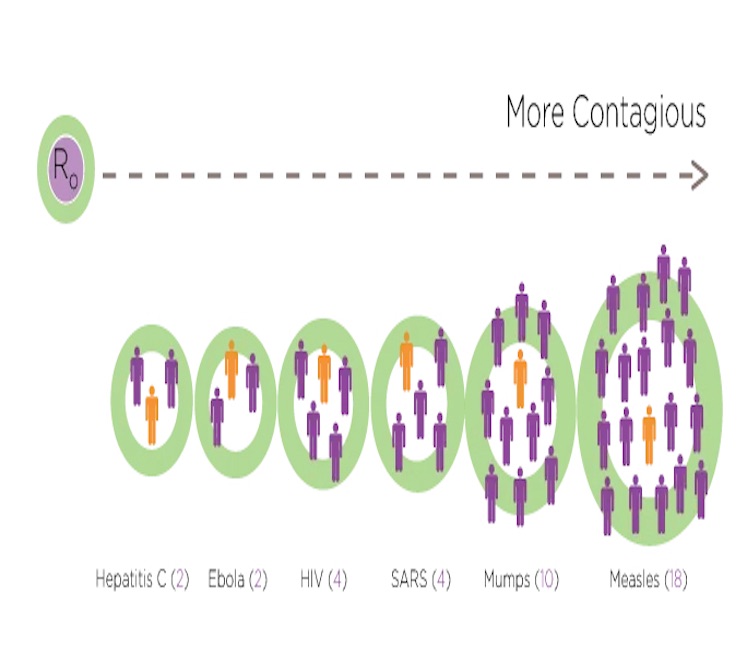 R0 is pronounced “R naught.” It’s a mathematical term that indicates how contagious an infectious disease is. It’s also referred to as the reproduction number. As an infection spreads to new people, it reproduces itself.

R0 tells you the average number of people who will catch a disease from one contagious person. It specifically applies to a population of people who were previously free of infection and haven’t been vaccinated. If a disease has an R0 of 18, a person who has the disease will transmit it to an average of 18 other people, as long as no one has been vaccinated against it or is already immune to it in their community.

What do R0 values mean?

Three possibilities exist for the potential spread or decline of a disease, depending on its R0 value:

Importantly, a disease’s R0 value only applies when everyone in a population is completely vulnerable to the disease. This means:

This combination of conditions is rare nowadays thanks to advances in medicine. Many diseases that were deadly in the past can now be contained and sometimes cured. For example, in 1918 there was a worldwide outbreak of the swine flu that killed 50 million people. According to a review article published in BMC Medicine, the R0 value of the 1918 pandemic was estimated to be between 1.4 and 2.8. But when the swine flu, or H1N1 virus, came back in 2009, its R0 value was between 1.4 and 1.6, report researchers in the journal Science. The existence of vaccines and antiviral drugs made the 2009 outbreak much less deadly.

The following factors are taken into account to calculate the R0 of a disease:

Some diseases are contagious for longer periods than others. For example, according to the Centers for Disease Control and Prevention, adults with the flu are typically contagious for up to eight days, while children can be contagious for up to two weeks. The longer the infectious period of a disease, the more likely an infected person is to spread the disease to other people. A long period of infectiousness will contribute to a higher R0 value.

If a person who’s infected with a contagious disease comes into contact with many people who aren’t infected or vaccinated, the disease will spread more quickly. If that person remains at home, in a hospital, or otherwise quarantined while they’re contagious, the disease will spread more slowly. A high contact rate will contribute to a higher R0 value.

The diseases that spread most quickly and easily are the ones that can travel through the air, such as the flu or measles. Physical contact with an infected person isn’t necessary for the transmission of such conditions. You can catch the flu from breathing near someone who has the flu, even if you never touch them.

In contrast, diseases that are transmitted through bodily fluids, such as Ebola or HIV, aren’t as easy to catch or spread. This is because you need to come into contact with infected blood, saliva, or other bodily fluids to contract them. Airborne illnesses tend to have a higher R0 value than those spread through contact.

What conditions are measured by R0?

R0 can be used to measure any contagious disease that may spread in a susceptible population. Some of the most highly contagious conditions are measles and the common flu. More serious conditions, such as Ebola and HIV, spread less easily between people.

This illustration shows some commonly known diseases and their estimated R0 values.

R0 is a useful calculation for predicting and controlling the spread of disease. Medical science continues to advance. Researchers are discovering new cures for different conditions, but contagious diseases aren’t going to disappear anytime soon.

Reproduced via Healthline with thanks

The Checklist Manifesto: How to Get Things Right

Remdesivir V Covid-19: New data supports it as a treatment