Some of Ireland’s Best Waymarked Trails 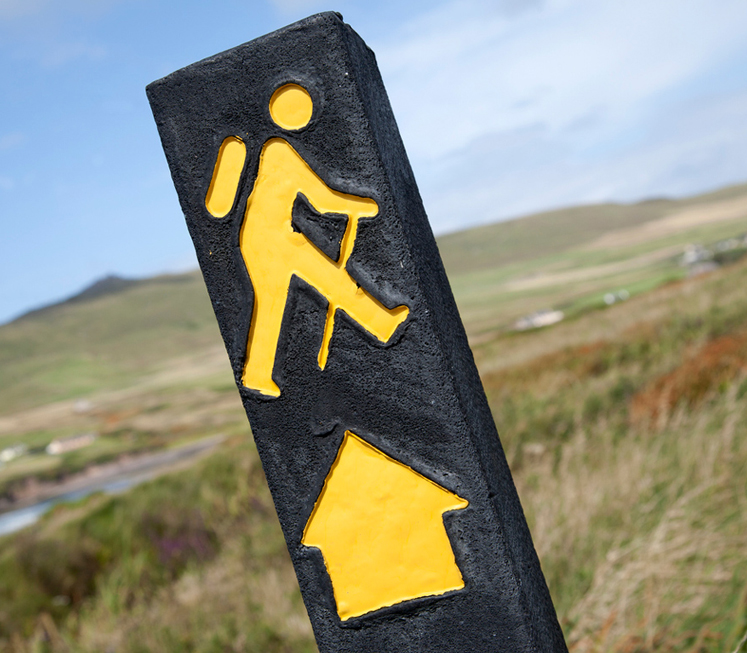 Ireland is positively covered in waymarked trails, and countless adventurers have travelled these well-worn paths across the country. We’ve picked a few of our favourites.

It’s important to note that while these trails are generally well marked, it’s still possible to get lost! Some of the markings have eroded and might have become damaged by the elements by the time you reach them. So, think of the waymarks as a guideline – an accompaniment, not a replacement for maps.

This is an epic trail, traversing 131 kilometres (or 81 miles) and three counties. Contrary to what you might expect from its name, the Wicklow Way begins in South Dublin and finishes in Carlow, taking in Wicklow in between.

Locals from all three regions will be familiar with the waymark symbol on signposts – a yellow outline of a man holding a stick.

If you’re especially determined, you can cover the whole odyssey in 5-7 days. Most, however, just do a small fraction of it. That might be the relaxed stroll through Dublin’s Marlay Park; a more challenging trek through some of the Wicklow Mountains or the paved, former cattle-droving roads of Shillelagh.

Marking such a long, elaborate route was a mighty achievement. But then again, so is walking it.

An even greater journey, the Kerry Way is a circular route of 214 kilometres. There’s as much variety overhead as there is underfoot, as you might be walking on tarmac, grass, paths, boreen roads or even boggy fields. So, plan accordingly.

Two things stand out about the Kerry Way: Firstly, while many of the views are spectacular, it has relatively few steep ascents; and secondly, this is a wonderfully diverse trail, taking you by cliff sides alongside the Atlantic through dramatic, windswept open fields and along gentle strolls on country roads.

Naturally, not everyone takes in the whole trail in one go. Some take it in incrementally, and there are accommodation options in this tourism-rich region. And others take in one of the nine recommended stages, depending on where they are and the kind of walk they prefer.

You can start in Killarney, Glenbeigh or Kenmare, to use just three well-known starting points.

Sometimes going by its poetic Irish name, “Slí na Mearacan” (the foxglove way), the Mid Clare Way is a moderate walk that brings you through much of what the Banner County has to offer.

It kicks off in Newmarket on Fergus, a lovely, small town and a perfect place to start or finish this trail: the town has B&Bs and bars, and a fine lake for fishing. From there, highlights include the village of Quin, the Burren, the forest and boglands of Ballinruan and the gorgeous, tranquil Dromore Woods.

A 42-kilometre, circular trail (with parking at its first entry point), Slí na Finne (or Finn’s Way) is a varied, pleasant walk.

Due to the relatively flat surface and paucity of accommodation on this route, some hikers like to take this in all in one go. But you can break it up or take in just fraction of it, should you want to.

Those who do make the journey are treated to a lovely assortment of landscapes and surfaces. Famously, of course, there’s the River Finn, where Finn Mc Cumhaill is said to have caught the Salmon of Knowledge. It’s still thick with salmon to this day.

As well as agreeable riverside walks, you’ll be crossing glens, forest trails, a disused rail track and the occasional road. The heather, bog, river and forest views are colourful and pretty, especially on a clear day.

This one kicks off in Monaghan Town, a lovely corner of the world with beautiful architecture dating back to the 17th Century (including the town courthouse).

Spanning three days, the full trail would take you across the county, past the pretty Lough Muckno and Lough Ross and eventually to the charming town of Iniskeen, birthplace of poet Patrick Kavanagh.

This is an opportunity to experience the understated, beguiling appeal of Monaghan, with its numerous scalable hills (drumlins), river walks and endearing villages. It’s also a fabulous trail for wildlife: your patience and observation might be rewarded with the sight of foxes, hares, swans and grey herons.

Rugby – Off The Ball Podcasts