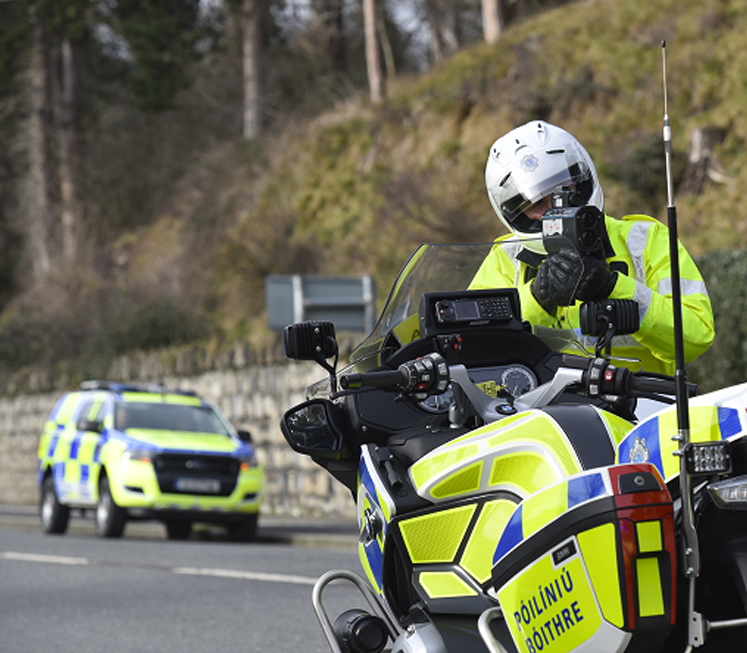 A month of action in respect of Road Safety will take place between the 1st February and the 29th February 2020.

The month of Action will focus on a number of areas to improve road safety:

While the Month of Action will target all road traffic offences particular emphasis has been placed on the enforcement of key “lifesaver” offences:

Our focus on these key offences will be supported by the greater use of new technology, the engagement of all personnel and the targeted deployment of Units during specific operations, to deny criminals the use of the road network and deliver an enhanced safety programme.

Additional Speed checks will be conducted across the country which will coincide with the rollout of two new types of speed detection devices.  The TruCAMII (50 Units) and the TruSpeed SXB (120 units).  Training in the new speed detection equipment is ongoing and will be completed by all roads policing member during the month of February. This new technology will provide members of An Garda Síochána with the latest speed detection technology available, which will increase the number of speed checks and make the roads safer.

Superintendent Eddie Golden “I welcome the provision of the new speed detection equipment and remind all drivers that the speed limits around the country are the maximum permissible limit not necessarily the safest due to changing road weather and traffic conditions. The new equipment enhances our ability to conduct speed enforcement checks over a 24 hour period.”

The new locations of all zones utilised by GoSafe will be available on the Garda and other websites on the 10th February 2020.

Driver distraction creates a real risk to drivers and vulnerable road users yet it is clearly visible to all of us that a significant proportion of drivers still use their mobile phone while driving.  A survey conducted by the RSA has also found that those using a mobile phone while driving were more likely to be non-compliant in other areas such as speeding, drink driving, insurance, motor tax etc.

During the month of action Gardaí will be proactive in issuing FCPN’s notices for these offences.  Members of the public are reminded that this offence carries 3 penalty points and a €60 fine.

Detections for Seatbelt offences in 2019 showed an increase of 3% when compared with the number of detections made in 2018.

“I am appealing for all drivers to ensure that all passengers are wearing a seatbelt particularly those in the rear and especially children.  Many of these tragic fatalities could be avoided if drivers followed this simple rule by ensured that before they move off everyone is secured correctly”, Superintendent Eddie Golden.

Driving While Intoxicated enforcement will focus on the detection of both alcohol and drug driving offences. Driving While Intoxicated detections for 2019 showed an increase of 5% when compared with the number of detections for 2018.  For the period from the 1st of January to the 30th January 2020 there were 741 arrests for Driving Under the Influence.  Of these 489 were over the legal limit.  170 of these arrests were for Drug- Driving offences. ( with results pending on other cases) Over the same period in 2019 there were 600 arrests for driving while intoxicated.

The RSA found that in 867 fatal collisions examined, 38% involved a driver, motorcyclist, cyclist or pedestrian who had consumed alcohol.

In 2019 statistic show that 1 in 10 drivers were detected for incidents of Driving While Intoxicated the morning after the night before. DWI Operations and Checkpoints will be conducted to remind motorists of the dangers of the Morning after.

In order to enhance our goal of denying criminals the use of the road network THOR Checkpoints within each Division will take place daily.  These checkpoints will be conducted by the Roads Policing Unit, The Detective Unit and the Armed Support Units.

Multi-Agency/Bi-Lateral Operations will be conducted by An Garda Síochána with the Road Safety Authority (RSA) and other external agencies during the month.

“I am asking all drivers of HGV, Large/Small PSV vehicles and fleet managers to ensure that their vehicles are checked on a daily basis and are road worthy”, Superintendent Eddie Golden.

Cyclist are vulnerable road users and every effort must be made to ensure that where cycle lanes have been made available, that they are accessible to the cyclist. Each Divisional Roads Policing Unit and Community Policing Unit will ensure that regular patrols are conducted in areas where cycle lanes are provided and where vehicles are obstructing these lanes appropriate action will be taken. Garda Members are aware of the new offence of ‘Dangerous overtaking of a Pedal Cycle’ and where such incidents are reported they will be fully investigated.  The Road Safety Authority will be running radio advertisement throughout the month highlighting this issue.

Superintendent Golden, “I would also appeal to pedal cyclists to be aware of the Fixed charge notices which apply to them on the public road. These offences all carry a €40 FCPN

Enforcement of other offences

Whilst there is a focus on the key “lifesaver” offences, An Garda Síochána will continue to  enforcement other road traffic offences.

Roads Policing members will be utilising their new mobility devices to check and identify Disqualified drivers.

February in the Garden