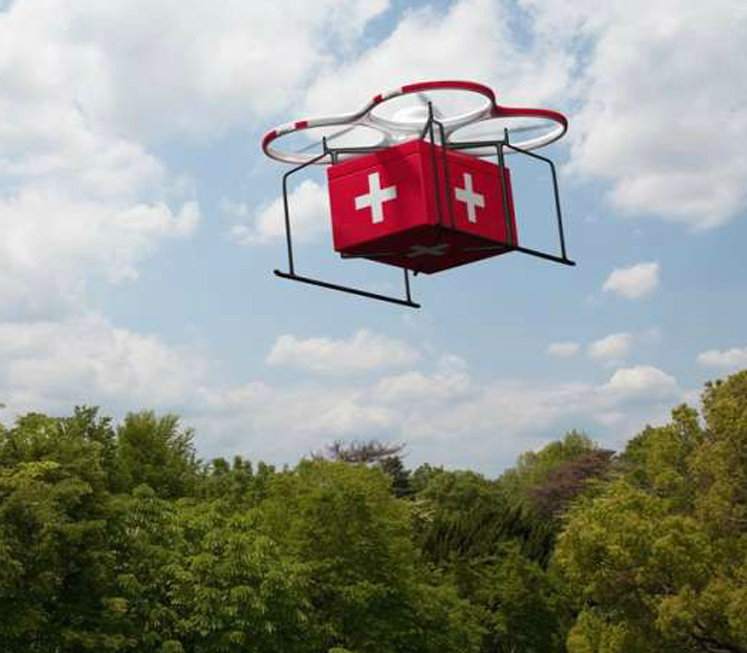 The emergency services always try to keep up with the newest inventions and innovations and use them to their and our advantage, since new innovations mean they’ll be able to aid even more people in a faster and safer way.

Especially in current times, with natural disasters becoming more frequent due to climate change, new gadgets, techniques and services are needed to cater to the growing number of those who are in need of immediate help.

A new gadget called “Safe Return” provides families with personal tracking and communication devices to connect individuals with developmental and intellectual disabilities with help or be located when lost, ensuring they return home safely.

Local Governments are contracting with Life Button 24 to provide these services. The Life Button 24 device can be worn one of four ways: as a pendant, as a wristband, on a belt clip or in a pouch inside clothing.

Through the use of geo-fencing, which works by creating a virtual perimeter through the use of GPS, these families, as well as law enforcement, will be alerted if their loved one leaves a pre-determined area without their knowledge. This makes it easier for the families to locate the special needs individuals and bring them home safely and quickly.

Crisis mapping is not new, with some platforms operating as early as 2008. However, GIS (Geographic Information System) mapping is more than just mapping. It is also an analytical, data management and visualisation tool. For example, GIS mapping is useful in fighting highly infectious diseases such as Ebola; digitally mapping and visualising outbreak locations, casualties and fatalities in the hope of preventing spread. GIS mapping is also used to create disaster risk maps of flooding, climate change adaptation and natural resources, and gives more transparency to NGOs, showing donors exactly where aid is going and where their contributions are making a difference.

DigitalGlobe owns and operates the most agile and sophisticated constellation of commercial earth imaging satellites in the world. The imaging is used to assist workers in global development and agriculture. The DigitalGlobe Foundation works with innovative geospatial imagery to address significant local, national and global challenges.

Communication is vital for aid workers and those displaced and disconnected from families. Innovative basic aid provisions, such as solar or wind-up lanterns, that combine as FM radios and mobile phone chargers can provide victims with radio broadcasts and help restore communication.

In an emergency, the ability to communicate is crucial and humanitarian responders rely on information and communication tools (ICT) for numerous aspects of their operations. Although they may not solve challenges on their own, the use of smartphone apps and ICT can positively affect relief work when used properly. Wireless services leader Smart Communications (Smart) pioneered telecommunications disaster response by setting up web-based solutions before and in the aftermath of Super Typhoon Yolanda. Smart provided free call stations using satellite phones and emergency satellite communications services, allowing various agencies to coordinate disaster response efforts and facilitate faster relief.

Allen Wixted was one of an eight-person team that created an innovative cloud-based platform that alerts and coordinates emergency response units to potential risks on the electricity network during storms.

The real-time solution, created by Wixted and his Cloud Command team, would allow emergency services such as the Gardai, fire services, hospitals and state agencies share information such as the precise location of damaged network, leading to better coordination during times of crisis.

The use of such networks during incidents of national significance can be employed to push real-time operational picture to Command staff. Resources employed can vary from manned airframes, UAVs, handheld smart devices, or on-water assets.

Deployable nodes would make the transmission of data over an unsecured network easier, or secured if necessary, readily updating channels to avoid interruption in service. Handheld devices would be employed by field observers enabling real-time updates and capturing damage assessments with coordinates and pictures automatically uploaded.

Rural areas often suffer from a lack of access to healthcare. Clinics and hospitals may be located hours away. These problems have driven innovations in portable medical equipment that are lightweight, robust, and operable without electricity. Life-saving equipment for sterilisation, anaesthesia, diagnostics, respiratory management and X-Ray allow aid and healthcare workers to basically bring the hospital to the patient.

True Energy has produced a solar-powered vaccine refrigerator that keeps medicine cool and safe without a connection to the electric grid. In addition to being solar-powered, it is so efficient that it is able to stay cool for ten days without a charge and contains a stabilising technology that adjusts appropriately to outside temperatures.

The company Eniware provides power-free medical sterilisation for surgical care in any setting, and Gradian Health has developed the Universal Anaesthesia Machine (UAM) that uses electricity and compressed oxygen when available and continues to deliver anaesthesia when either of these sources are inaccessible or in low supply.

SkyLIFE Technology saves lives by providing aerial deployment of humanitarian aid by dropping aerodynamically engineered packs and boxes to those in need. The packs contain essential aid supplies including food, water, hygiene, power, blankets, shelter and communication devices, which is especially helpful for people stuck in barely accessible places during floods, earthquakes and even avalanches.

Drones are already being used in emergency response around the world. An unprecedented number of small and lightweight drones were launched in the Philippines after Typhoon Haiyan in 2013. They were used in Haiti following Hurricane Sandy in 2012.

The view from above is key for humanitarian response, which explains why satellite imagery has played an essential role in relief operations for almost two decades now. But satellites do present a number of limitations including cost, data sharing restrictions, weather – especially clouds, and the time needed to acquire images.

Every year, Switzerland responds to about 1,000 backcountry emergencies, hikers injured in falls or gone missing, campers stranded by rock slides or floods. Currently, the normal way to find people is to dispatch human search parties, sometimes into dangerous parts of the Alps. This work is rough and time-consuming; about 10,000 manpower hours are used annually in Switzerland alone. Emergencies in other dangerous hiking destinations, such as Nepal and Peru, only add to the global total.

Now, a team of Swiss researchers has developed a search and rescue drone. Aerial missions offer several obvious benefits: Drones are relatively cheap these days, several can be released at the same time to search different areas in a short time, and they don’t place human responders in dangerous situations. The newly developed device, however, isn’t like the drones flooding the commercial market. In fact, it may be smarter than the average human.

The drone’s navigation software relies on a specially designed algorithm that allows the drone to process and recall visual experiences. By having the robot process about 20,000 images of trails in the Alps, the researchers trained it to recognize both official trails and beaten dirt or softened grass paths. This means the drone can spot and then autonomously steer itself along routes that missing people may have followed or even blazed themselves. The research team found that the device has an 85% accuracy rate in identifying trails, 3% higher than the humans trying to do the same from the ground.

The next phase is teaching the drone to recognize faces. With different software, which is still in development, the device could learn to distinguish human features in images, alert responders to individuals’ precise locations, and possibly even describe what condition they are in. The drone, in other words, will be able to do all the searching in emergencies. Humans will only have to swoop in for the rescue.

Two engineering students at George Mason University in the United States harnessed sound to put out fires. Their chemical-free, water-free extinguisher uses sound waves to separate burning fuel from oxygen. Fire dies out without oxygen, so using the soundwave extinguisher on a small fire suffocates it almost instantly.

Researchers previously patented this idea but this is the first sound wave extinguisher to work reliably. Not only does it work, but the final prototype is handheld and relatively cheap, only costing $600 to build.

The sound wave extinguisher provides non-destructive fire safety technology, which is ideal for home use. At the moment, the technology is only suitable for small fires since it does not contain a coolant. This means larger fires put out could reignite on hot surfaces. Researchers suggest that pairing this technology with drones could help in fighting large fires, when traditional methods just aren’t enough.

There are about 137 volunteer doctors – GPs, consultants and emergency department medics – giving their time and expertise to the Irish Community Rapid Response (ICRR), an organisation that responds to medical emergencies by helicopter. One of them is Dr Horan, who normally works as a Consultant in Emergency Medicine at the Mayo University Hospital.

The ICRR works in conjunction with the HSE National Ambulance Service, responding to 999 higher priority calls where there is a critical illness or significant injury. The intention is that eventually the air ambulance will be rolled out nationally.

The helicopter they typically use is a light utility, twin-engined machine with a 10-metre rotor disc and it is small enough to get into the tightest of spaces. It has the capacity for one pilot, two medics and one patient.

Serving largely a rural area from his Westport home, Dr Horan deals with an average of around three out-of-hours emergencies each week in some of the most isolated parts of the country.

The Mayo ICRR is run by Dr Horan, who responded to his first emergency call-out in September 2015. Since then he has dealt with well over 150 emergencies. Location played a key part in his decision to get involved.

In Mayo there’s only one hospital, in Castlebar, and there are quite long distances to travel. If there is an emergency in west Mayo or northwest Galway, chances are he is going to be there before the Ambulance Service. By being there, he can start treatment on a patient before they leave the scene so they have had an hour of advanced treatment before they even get to hospital. That life-saving treatment is often beyond the scope of practice of a paramedic.

Dr Horan is looking forward to the day when the Irish Community Air Ambulance can further enhance this service nationally. A similar service, the Wales Air Ambulance, launched in 2001, completes around 2,000 missions a year. The charity’s chief executive officer, Angela Hughes, was in Ireland recently to support the launch of the air ambulance.