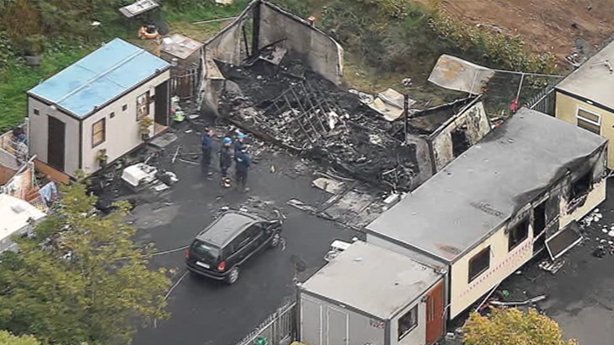 Masses have been held to commemorate the victims of the Carrickmines halting site fire that claimed 11 lives – including an unborn baby – last year.

The deadly fire broke out in the early hours of 10 October last year.

Those who died were Thomas Connors, 27, his wife Sylvia, 30, and their children Jim, five, Christy, three and six-month-old Mary; Willie Lynch, 25, his partner 27-year-old Tara Gilbert who was pregnant, and their daughters Jodie, aged nine, and Kelsey, four, as well as 39-year-old Jimmy Lynch, brother of Willy and Sylvia.

Seven members of the Connors, Lynch and Gilbert families were joined by representatives of the Garda, Fire Service and Balally and Stepaside parishes to bring a candle each to the altar commemorating those who died at the mass in Balally Church in Sandyford.

Fr Dermot Lane asked whether anything has changed in wider society’s relationship with the Traveller Community in the 12 months since the fire.

He said it is important to keep alive the disturbing memory of the fire in society, local authorities and among politicians to ensure a tragedy of its magnitude never takes place again.

Fr Lane said: “It’s so easy for us in the settled community to forget what happened while the painful reality remains permanently present in the hearts of the grieving families.”

He also blessed a plaque commemorating those who died, including Tara Gilbert and Willie Lynch’s unborn baby. 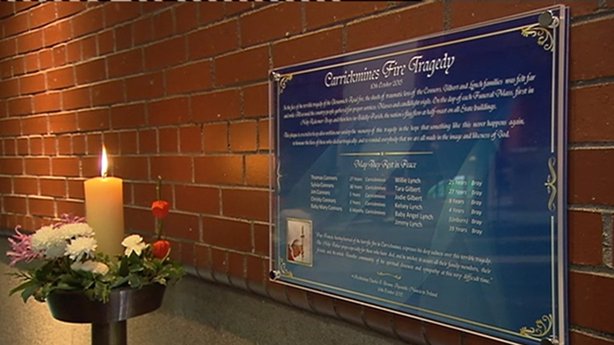 Fr Derek Farrell said more needs to be done to build on the intensifying co-operation between the State, settled communities and Travellers and that the building of a mutual valuing of identity is within our grasp.

The masses were followed by the blessing of the graves in Bray and Wexford.

Later this evening, Traveller community organisations will hold a silent candlelight vigil outside the Dáil at 7pm.

The halting site on the Glenamuck Road was closed following the fire and surviving family members were given temporary accommodation in a nearby council car park in Ballyogan after objections were raised to placing them in a local housing estate.

In recent days hoarding has been erected at the closed site and construction work on new permanent halting site accommodation a short distance from where the fire occurred is due to commence soon and be completed by next July.

Dún Laoghaire Rathdown County Council has also erected a memorial stone to the Carrickmines victims by the Statue of Our Lady that still stands at the original site entrance.

Gardaí have confirmed that their investigation file into the fatal fire has been sent to the Coroner’s Office but no date for the opening of inquests has yet been confirmed.