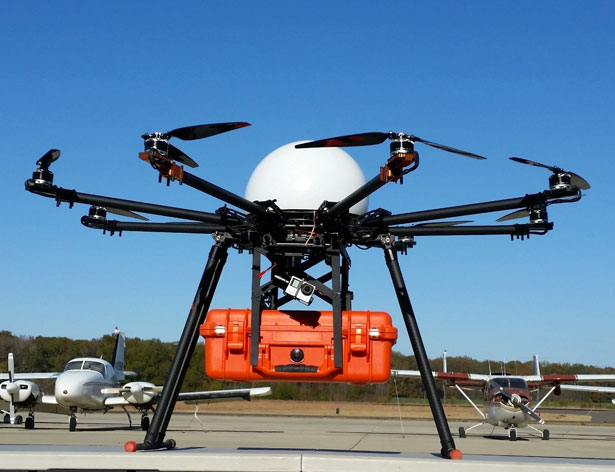 In the aftermath of the twister, Dr. Italo Subbarao, an associate dean and disaster medicine specialist at the William Carey University College of Osteopathic Medicine in Hattiesburg, sent his students out to study how quickly emergency medical teams had responded to the disaster.

The tornado, with winds up to 170 mph, had injured at least 80 people. In some cases, the students found, emergency medical responders had been slowed by fallen trees, power lines and debris as they tried to reach the injured.

That research led Dr. Subbarao to wonder if there was a better way to deliver medical care before emergency responders could navigate the mayhem that comes disasters.

By combining the two technologies, drones and telemedicine, a doctor miles away could instruct a layman at the scene in how to provide rudimentary, but perhaps life-saving, medical care.

Three prototypes have been produced and several demonstration flights conducted, leading to inquires from Emergency services across the globe.

Drone technology has been around for some time, but with advances in the technology gathering pace, it has long been hoped to harness them for medical uses i.e. transport medicines, organs for transplants, blood supplies and anti-venom serums.

To date this appears to be the most advanced attempt to equip a drone with audiovisual equipment so doctors and survivors can interact in an emergency.

The three rotary-winged drone prototypes are capable of carrying medical kits weighing up to 20 pounds. They are working with the state on integrating the medical drones with existing emergency systems, and Subbarao says he hopes to have a real-life medical drone in operation before the end of the year.

Lee Smithson, director of the Mississippi Emergency Management Agency, said, “This is going to be a phenomenal way to provide immediate medical attention anywhere in the state.” Noting Mississippi’s frequent poor rankings among states in measures of well-being, he added, “It’s about time that Mississippi leads the nation in something good for a change.”

The plan, Smithson said, is to eventually station a drone in as many as nine different areas of the state, so every place in Mississippi is within two hours of a medical drone.

Chris Sawyer, medical director of Remote Area Medical, isn’t surprised by the broad interest in the project. “It is revolutionary,” he said.

It’s also not altogether a surprise that the idea of an interactive medical drone arose in Mississippi. The state is frequently visited by tornadoes, some of which have caused substantial numbers of deaths and injuries. The state has a shortage of doctors and, according to Smithson, many areas of the state cannot be reached quickly by medical responders.

Interactive Medical Drones are no longer in the realm of science fiction and their potential to help save lives? Perhaps sky’s the limit.

Patients encouraged to participate in National Experience Survey before deadline