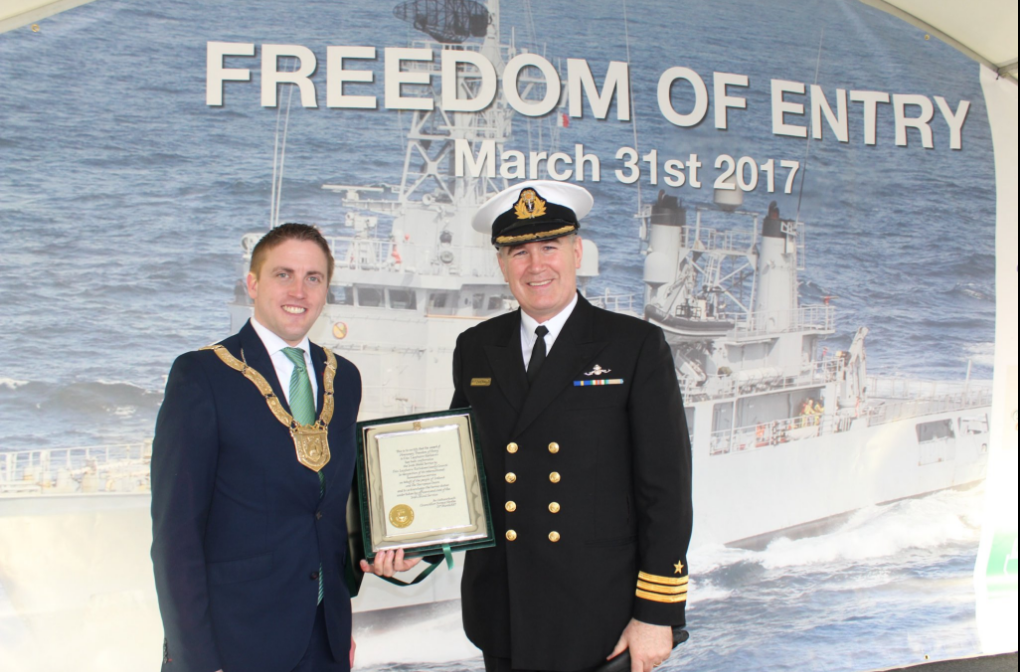 Dún Laoghaire-Rathdown County Council has bestowed the Freedom of Entry to the County on the Irish Naval Service.

The Award is in recognition of its humanitarian service on behalf of the people of Ireland and the European Union and to acknowledge the duties undertaken by the Irish Naval Service as part of Operation Pontus.

The conferral was the first ever presented by DLRCC and that of any council.

Master of ceremonies, RTE’s Mary Kennedy highlighted the significant role played by LÉ Eithne along with fleetmates during Operation Pontus, in the rescue of 15,000 migrants and refugees.

The ceremony also provided an opportunity to mark a more solemn moment with a minutes silence taking place to honour those lost in the Irish Coastguard Helicopter tragedy of R116 off Blacksod, Co. Mayo.

An Cathaoirleach of Dún Laoghaire-Rathdown County Council, Cllr. Cormac Devlin, said, “The Irish Defence Forces have a proud record of international humanitarian service on behalf of the EU and UN. Defence Forces ships, working with the Italian navy as part of Operation Pontus, have rescued over 15,000 would-be migrants attempting to cross the Mediterranean sea.”

“The civic honour of Freedom of Entry is the highest compliment a municipality can pay a naval group. It is therefore very fitting that dlr would recognise and publicly acknowledge the heroic duties undertaken by officers and crew of the Irish naval service”, concluded Cllr Devlin.

The Garda Reserve is taking on 300 more recruits