The Facebook Safety Check feature has proven to be an indispensable resource for concerned citizens in times of natural disaster. Since the attacks on Paris at the end of last year it has also been extended to be deployed during terrorist attacks.

It works like this: Facebook uses geolocation to identify its users who live in, or may be travelling through, an area affected by a disaster. Each user then gets a notification from the website that encourages them to “check in”. Once they do this, their friends and family will know that they are safe. 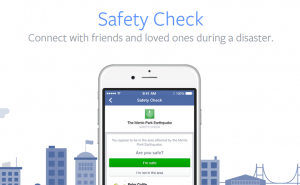 The idea for Safety Check was conceived following the 2011 earthquake and tsunami in Japan. During the disaster, Japanese citizens took to social media to see if any of their friends or family had been affected, and also to post about their own safety. Facebook’s idea was to make this process easier and more streamlined. In 2014 the new feature was activated following the Nepal earthquake.

On its initial run it experienced some teething problems. For instance, many people all over the world were asked if they were safe from the earthquake, despite being nowhere even near Asia. However, overall the feature was a success: People travelling through Nepal on holidays were able to update people back home about their safety; the check-in feature meant that phone networks weren’t clogged up with needless phone calls but instead were free for emergency callers. Following Nepal, Safety Check was activated in a series of other natural disasters. There was the earthquake in Chile, as well as Hurricane Patricia and an earthquake in Pakistan.

It was during the Paris attacks that Facebook decided to implement the Safety Check once again. The decision meant that it was now acting as a tracker during all mass emergencies and not just natural disasters. However, Facebook came under criticism when Beirut was hit by a similar terrorist attack and it didn’t provide the service. The issue was that Facebook was deciding on its own discretion which emergency was deemed important enough to warrant a Safety Check.

The fallout from its decision to exclude Beirut led Mark Zuckerberg to quickly change the Safety Check implementation policy to include more human disasters going forward, and not just disasters that happen in the Western world.

When a bomb was detonated in Nigeria on the 17 November killing dozens, Facebook did not hesitate to use Safety Check. The social media feature had become the worldwide go-to tracker when disaster struck around the world.

After the attack, Zuckerberg said: “A loss of human life anywhere is a tragedy, and we’re committed to doing our part to help people in more of these situations.”

Undoubtedly, Facebook’s Safety Check will continue to expand. Though it is not an emergency service, it is a great assist in the very important task of helping family and friends connect with each during times of disaster.