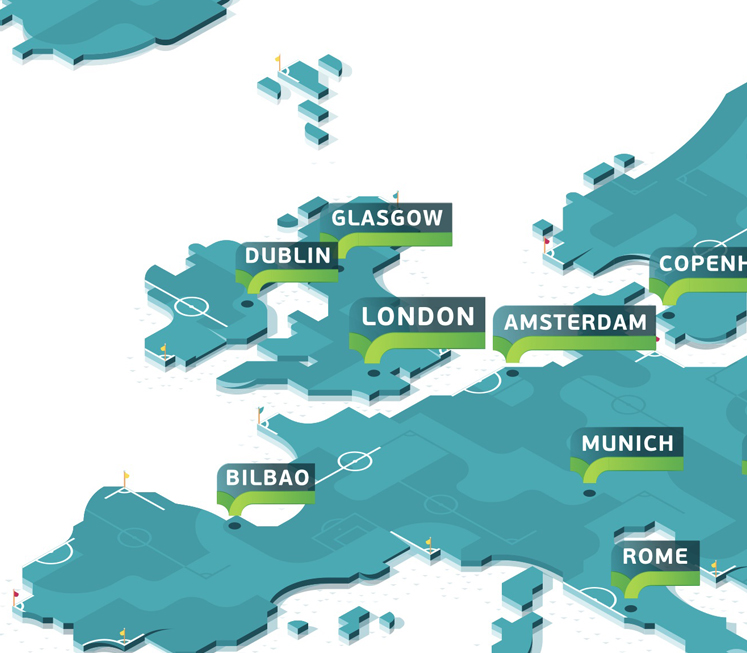 Dublin’s hosting of UEFA EURO 2020 next year will be worth an estimated €106m to the Irish economy according to an independent economic impact study carried out by EY-DKM on behalf of Dublin City Council. Dublin’s Aviva Stadium is scheduled to host three group games and one Round of 16 game in June 2020 in what will be the biggest sporting event to ever be held in the country.

It is anticipated that between 76,000 and 96,000 additional tourists will visit Ireland during the two-week period between June 15th 2020 and June 30th 2020, with the average stay estimated to be around six nights. Half of these will be spent outside of Dublin and foster balanced regional development. UEFA EURO 2020 will also result in the creation of 2,780 full-time jobs before and during the tournament as a result of additional tourism and organisation spending.

The economic impact study estimates that for every €1 of public spending, the tournament will generate €4 of additional revenue for the Exchequer.

In December 2018, the UEFA EURO 2020 Qualifying Draw was held in Dublin’s Convention Centre. The EY-DKM report shows that this event generated €2m for the Irish economy, with up to 600 overseas visitors attending during the off-peak tourism season.

With an expected global audience of 5 billion, Dublin’s hosting of UEFA EURO 2020 will represent a unique opportunity to showcase the city and country to the world. A Local Organisation Structure (LOS) comprising of Dublin City Council, Department of Transport, Tourism and Sport, Football Association of Ireland and the Aviva Stadium has been working on tournament preparations since winning the bid in September 2014.

The impact of UEFA EURO 2020 will not be limited to economic factors, there will also be a social and cultural impact. To date, over 1,600 people have applied to volunteer during the tournament with applications received from every county in Ireland and 56 different nationalities. The application process remains open and anyone interested in being part of UEFA EURO 2020 should visit euro2020.com/volunteers.

Paul McAuliffe, Lord Mayor of Dublin: UEFA EURO 2020 will be the biggest sporting event to ever be held in this country and excitement is quite rightly building across Dublin and Ireland. Dublin is world-renowned for being a welcoming destination for tourists. We are extremely proud to be hosting UEFA EURO 2020 and sharing our city with visitors from all over Europe. The anticipated cultural and economic impact of the tournament will leave a long-lasting legacy on our city and beyond.

Shane Ross TD, Minister for Transport, Tourism and Sport: UEFA EURO 2020 will be one of the biggest sporting events taking place in the World in 2020 and will be watched by a global audience. The results of this economic impact study show the overwhelmingly positive effect that hosting this tournament will have on Dublin, Ireland and the wider economy. It will also serve as a great opportunity to demonstrate Ireland’s credentials to host future sporting events.

Brendan Griffin TD, Minister of State for Tourism and Sport: Ireland is a country that regularly punches above its weight on the sporting stage, so to have a world-class football tournament taking place in Dublin will be hugely inspiring and memorable. A lot of hard work has already gone into ensuring that UEFA EURO 2020 will be a success and we are looking forward to the games in June 2020.

Shane McSweeney, Partner and Head of Government & Infrastructure, EY Ireland: UEFA EURO 2020 should have a significant positive economic impact on Dublin and on the rest of Ireland, and the event is likely to generate a strong return on investment for the Exchequer. Major events of this scale go much further than ‘just’ sport; they play an essential role in enhancing tourism and the economic attractiveness of the country internationally. The benefits of the UEFA Euro 2020 draw last December are already being felt in Dublin, and enthusiasm is already beginning to build ahead of the organisation of the 2026 Ryder Cup in Adare, Co. Limerick.