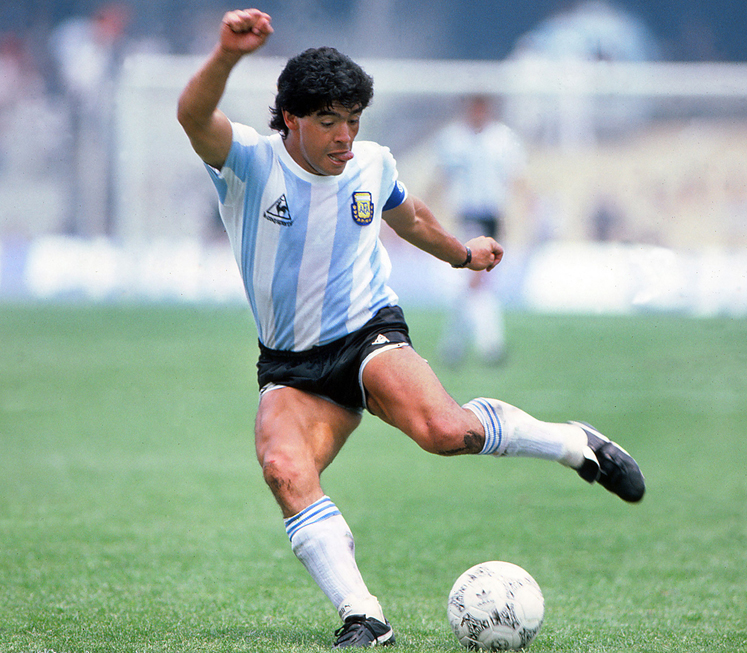 On November 10, 2001, Diego Armando Maradona played his final testimonial match, in Buenos Aires. For those unacquainted with the tradition, testimonials are tribute games, played for adoring, nostalgic fans, in which friends of the honored player jog leisurely around the pitch, allowing him one more moment of glory. Maradona’s testimonial was an all-star affair, with luminaries like Hristo Stoichkov and Eric Cantona, befitting a player who was once regarded as the best in the world. In his prime, Maradona could flit past defenders with sublime ease, but now, at forty-one, he was overweight, with bad knees and bad ankles, and had been fighting drug addiction for nearly two decades. The opposing players indulged him, stepping aside as he lumbered by. He scored two goals that day, both penalties against René Higuita, the former goalkeeper for the Colombian national team, who obliged his old friend by jumping out of the way. Each time the ball hit the back of the net, Higuita and Maradona locked in an embrace.

For casual fans, it made for uncomfortable viewing. Even for those of us who knew the broad outlines of Maradona’s fall from grace, it was shocking. In the nineteen-eighties, when I was in middle school, Maradona had been my idol, but, by the time of the testimonial match, I admit that I’d lost sight of his career. It was harder to keep up with world soccer in those days, but that’s only a partial excuse. This, unfortunately, is how we often treat our heroes: with a kind of transactional love. We use them up. Seeing him in that tribute game was a reminder of all we’d taken from him, and I wasn’t the only one who felt that way. A few days later, in Lima, Peru, I visited a cousin of mine. At the mention of Maradona’s farewell match, he fell into a reverential silence, his eyes suddenly watering. “Diego is going to die,” he said in an urgent whisper, the words tumbling out with the force of discovery, as if Maradona’s mortality had never occurred to him. My cousin was in medical school at the time.

If it seems strange to you that a med student could forget that another human being was subject to the same laws of life and death as the rest of us, it’s likely you didn’t see—perhaps “experience” is the correct verb—Maradona at his peak. Argentina’s quarter-final match against England in the 1986 World Cup will always be remembered for Maradona’s two goals, which, taken together, are a kind of shorthand into his genius and recklessness. The first, an audacious handball, is brazen, opportunistic cheating—which somehow worked. His second, scored minutes later, is known simply as the Goal of the Century: a dazzling, mazy seventy-yard sprint with the ball glued improbably to his left foot, as English defenders flail helplessly to the side. The iconic Argentine-television narration sums up the feeling: “Diego,” the breathless announcer shouts, “what planet are you from?”

Somehow, between scoring that goal, winning the World Cup two matches later, and that 2001 testimonial match, it all went wrong. Asif Kapadia’s remarkable new documentary, called simply “Diego Maradona” and released, in September, on HBO, tells the harrowing story of what happened. The film, like all good sports documentaries, is only ostensibly about sport: in fact, it’s a tragic parable, a portrait of genius, a revealing look at the emotional cost of fame and how disposable talent can be, no matter how otherworldly the gift. What the film makes clear is that the origins of Maradona’s downfall were always present; the bold recklessness that made him successful also crippled him in the end.

Maradona grew up in Villa Fiorito, a slum on the outskirts of Buenos Aires. Raised in poverty, he signed his first professional contract at age fifteen, and supported his family from that day forward. At twenty-one, he joined F.C. Barcelona, for what was then a world-record fee. The film’s first shocking sequence comes from the tail end of his time there: a young Maradona in an on-field brawl, wading fearlessly into the thick of the chaos. It was the final of the Copa del Rey, played before the King of Spain, though these sporting details hardly matter. This isn’t soccer we’re watching; it’s a street fight. A quick cut takes us to the end of the incident: Maradona, panting, his blue-and-red jersey torn at the neck, and, behind him, a glimpse of the stadium, the faceless thousands who’ve just witnessed this madness. He seems not to notice them.

The documentary really begins in July, 1984, when Barcelona sold Maradona to Napoli (for another world-record fee), and eighty-five thousand fans packed the Stadio San Paolo to welcome him. Nothing about the sale made sense: one of the world’s greatest players (he was not yet the greatest) sold to a club in Italy’s poorest and most violent city, a team more accustomed to fighting relegation than vying for trophies. The illogic is hinted at in the first press conference, when an impudent journalist dares to ask what many must have wondered: Did the local Mafia have anything to do with financing this deal? Maradona, young and handsome, dissembles for a moment, before the president of the club, Corrado Ferlaino, steps in to reject the notion with full-throated anger. In spite of these denials, the spectre of the Camorra haunts the film, always present, dark and seductive.

The film argues convincingly that Maradona’s greatest sporting achievement was not the 1986 World Cup victory with Argentina but the two scudettos—Italian domestic-league championships—that he won with Napoli, in 1987 and 1990, which upended the league and angered the traditional powerhouses. The vitriol directed at Napoli and its fans was an expression of a national divide between the North and South. Naples was thought of as backward, barely part of Italy at all but, in the words of one commentator, “African,” a statement that reveals some of the racism that still plagues soccer today. During Napoli’s match against Juventus, in Turin, the fans sang, “Sick with cholera! Victims of the earthquake! You never washed with soap! Napoli shit! Napoli cholera! You’re the shame of Italy!” An underdog from a slum, Maradona took this classism personally. Later in the film, we see him at home with his young daughter, still in diapers. She has a microphone in her hand and he’s coaching her: “Juventus, vaffanculo!” he says—“Juventus, fuck off”—delighting as she repeats it. This scene approaches the essence of his gift. It wasn’t simply athletic; it was in his character, his defiance.

The on-field footage is stunning, but it’s the smaller, more intimate moments that really stand out: we see a young Maradona playing tennis with his girlfriend; relaxing at a family barbecue; leading his teammates in fight songs; lost in his thoughts as a party rages around him. Fans gather at his doorstep, begging for autographs and photos, though it doesn’t seem to gratify him. To be famous is to be condemned to a unique variety of loneliness. Nevertheless, the Neapolitans, who can scarcely comprehend their good fortune—it’s as if their city has been visited by an angel in soccer cleats—shower him with manic adulation. A nurse leaves a vial of Maradona’s blood on a shrine in a Catholic church. When Napoli wins its first title, a banner is hung along a wall at the entrance to a cemetery, taunting the dead: “You don’t know what you missed.”

In a sense, we all missed it: not what happened on the field but Maradona’s decline, which took place away from the fans. Now, with this film, it’s all there, right before our eyes. As the fame wears on him, he puts on a little weight. We see him with a local mafioso, going out for the night. He describes his routine: after the weekly game, on Sunday, he parties until Wednesday, with cocaine provided by his Mafia friends; he takes a few days to dry out; he plays again; he repeats. It all seems so joyless. After leading Napoli to its first (and, for now, only) European club title, in 1989, Maradona asks to be transferred. He is spent, and descending into full-blown addiction. Ferlaino, Napoli’s president, says no. “I became his jailer,” Ferlaino admits.

The defining moment came during the 1990 World Cup, in Italy. Maradona, playing for Argentina and already hated by most Italian fans because of his association with a despised club, was booed everywhere he played. Argentina met Italy in the semifinals, at Napoli’s Stadio San Paolo. For Maradona, it was a kind of homecoming to a city ridiculed by the rest of Italy, so he invited local fans to support Argentina instead. This was perceived by many as disrespect, and, when Argentina eliminated Italy, Maradona became the most hated man in the country. The next season, back at Napoli, he faced fury unlike any he’d ever encountered. Now unloved, his partying spun out of control. Soon afterward, he was caught in a doping-and-prostitution scandal, the league banned him from the game for more than a year, and he returned to Argentina in disgrace.

What’s remarkable isn’t the scale of Maradona’s precipitous fall but the fact that he kept it together for so long, under such intense pressure. Watching the film, we get a sense of what might have been if this supremely gifted athlete had been protected, just a bit, from the demands of fame, and from himself. The day of his 2001 testimonial, Maradona took the microphone and stood before the crowd, arms folded across his chest, as they sang his name. Soccer is the world’s most beautiful game, he said, and nothing he’d done should be held against the sport itself. “I made mistakes, and I paid for them,” he said. The entire stadium roared back its forgiveness, and he paused for a second, before continuing. “But the ball is never stained.”