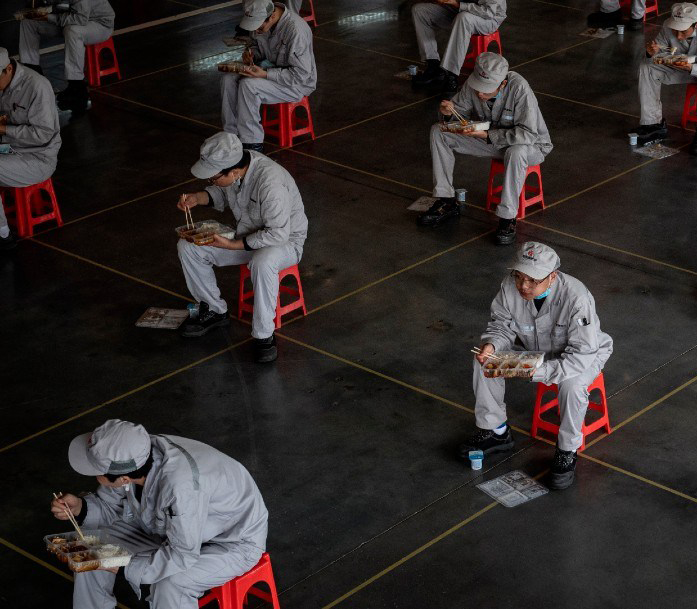 The Chinese province of Hubei, where the coronavirus pandemic began, has been returning to normality after travel restrictions were lifted on Wednesday and quarantine due to end on April 8.

The province’s airports have been finalising preparations to receive passengers again, including rigorous disinfection, according to state television channel CCTV.

Once they resume operations, they will use an infrared temperature measurement system at control points with isolation areas at the terminals in case fever symptoms are detected in travellers, CCTV added.

Supermarkets in the provincial capital Wuhan reopened to the public on Thursday under strict preventive measures including limiting the number of people who can shop at the same time, the TV channel reported.

Shoppers have to wait outside before entering a store and other public places have installed a QR code system which only allows access to people with a certificate of health.

“People who meet in public places should continue to wear a mask and maintain a safe distance,” Zhang Canyou, from the city’s Centre for Disease Control and Prevention, told CCTV.

Wuhan was put into a strict quarantine on January 23 that paralysed all non-emergency movements in the city.

More than 2,530 people have died from Covid-19 in the city since the outbreak was first detected in December, according to Chinese authorities.

The official number of infections in the country since the start of the pandemic was reportedly just under 81,300 with fatalities approaching 3,300.

Health officials in China have said 74,000 people have been discharged after recovering from the disease, with another 1,200 patients in serious condition.

Chinese authorities said Thursday that the number of active infections in the country was slightly below 3,950, continuing a rapid downward trend in new cases.

In the past 24 hours, there have been six deaths, all in Hubei and five of them in Wuhan, according to officials.

Mi Feng, of the Chinese National Health Commission, said: “China is still under great pressure to prevent the spread of the disease.”

There are strong fears of a rebound in infections from cases brought into the country from abroad.

A total of 67 such infections were detected in the last 24 hours putting the total of imported cases at more than 540, according to the health commission.

As the disease has continued to spread around the rest of the planet many Chinese citizens have returned to the country, where the outbreak appears to have been brought under control.

Luo said that around 40 per cent of that number were Chinese students studying abroad and urged people to stay where they are to avoid spreading the infection.

Last week Beijing diverted international flights bound for the Chinese capital in a bid to stop the number of cases from rising in the city.

All international travellers were also ordered to carry out a 14-day confinement in hotels, a measure that also already applies in Shanghai.

Beijing has criticised United States Secretary of State Mike Pompeo after he denounced China’s “disinformation campaign” on the coronavirus the day before a videoconference G7 summit.

The two countries have exchanged accusations about the origin of the virus, with US President Donald Trump referring to the pathogen as the “Chinese virus” and some Chinese officials promoting a theory that US soldiers brought the disease to Wuhan during a visit.

The clash has threatened to overshadow an emergency G20 video conference taking place on Thursday.

Chinese President Xi Jinping is due to participate in the event, which the Chinese press has described as an opportunity to establish a global action plan to combat the pandemic.