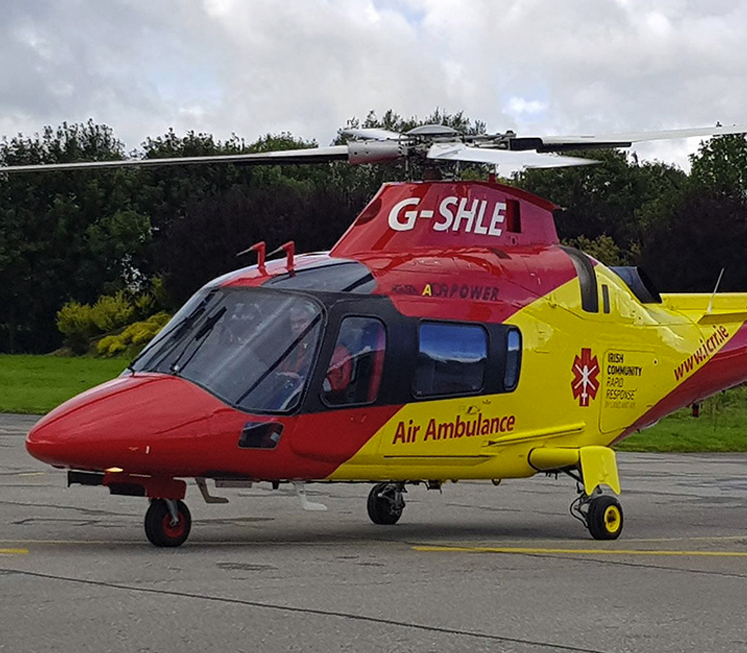 Ireland’s only charity air ambulance service has surpassed the 100-mission mark in its first two months of operation.

The helicopter emergency medical service, or HEMS for short, went live on July 30th last and it was officially launched by the Tánaiste on September 2nd.

Ruth Bruton, the operations manager with Irish Community Rapid Response (ICRR) told The Southern Star: ‘That is 100 families that have been assisted so far.’

Initially, the air ambulance – which is run by the ICRR but has the support of the HSE’s National Ambulance Service and the Department of Health – thought it would be tasked to do 500 missions in its first year, but now it is likely to be far in excess of that figure. Ruth said: ‘It shows that the service is needed, and that it is proving to be a most effective asset in remote, rural areas.’

The ICRR has also carried out 563 ground service missions so far this year involving its network of volunteer doctors and rapid response vehicles.

Since 2008, the ICRR developed a network of more than 250 land-based volunteer doctors and 10 rapid response vehicles across the country – all of which deliver critical medical interventions.

‘The money raised by the service through donations is being put to good use,’ said Ruth, ‘but now we are launching a major new appeal to keep the service airborne.’ She appealed to corporate and public backers to get behind the organisation once more and help them raise the €2m they need per annum.

As part of that public appeal, the organisation has launched a ‘Flight for Life’ nationwide raffle offering a top prize of a helicopter trip from Italy to Ireland.

The founder of ICRR, John Kearney, told The Southern Star: ‘This has exceeded all of our expectations. Now, we are hoping that people continue their generous support of this life-saving organisation.’