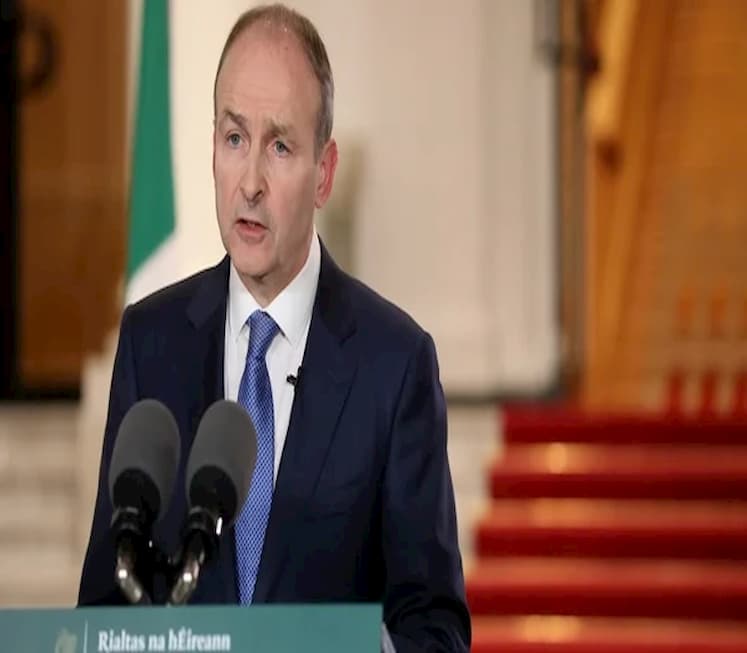 Action now can prevent the need for an “immediate comprehensive lockdown” in the Republic of Ireland, Taoiseach (Irish PM) Micheál Martin has said.

In a televised address, he confirmed that level three restrictions would be imposed nationwide from Wednesday.

The move rejects a recommendation by public health experts to impose the strictest level five measures.

“If we all act now we can stop the need to go further, with introducing level four and five restrictions,” he continued.

The taoiseach said this would risk hundreds of thousands of jobs.

The challenge for government “at this stage”, he added, was to be as “effective and proportionate as possible” in how it deals with Covid-19.

No crowds at sport

This would have seen restrictions similar to the lockdown measures imposed in March.

But Tánaiste (Deputy PM) Leo Varadkar told RTÉ the government did not think the NPHET recommendation had been “thought through properly”.

Level three measures mean there will now be tighter limitations on gatherings and people will be advised to work from home unless absolutely necessary.

It also means that sporting fixtures in the Republic of Ireland will be played behind closed doors, with only professional or elite sporting activities permitted.

Mr Martin said the country’s five-level system allowed the government to have a flexible and appropriate response to “new trends”.

However, he said it also gives “everybody a fair opportunity to plan and respond”.

In response to Mr Martin’s statement, Sinn Féin president Mary-Lou McDonald questioned what additional support would be provided for families, workers and businesses affected by the new regulations.

The taoiseach reported that the new restrictions would be reviewed in three weeks’ time.

Counties Donegal and Dublin had already been placed under level three restrictions in recent weeks.

There were 518 new cases in the country on Monday, with no further deaths in the previous 24 hours.

The letter sent to the government by the NPHET on Sunday calling for a move to level five restrictions nationwide was published on Monday evening.

It states that “it is vital we do everything in our power now to arrest the current trajectory nationally and very substantially suppress the virus back down to a low level of transmission in advance of the winter months.”

It adds: “The NPHET advises that the profile of the disease is such that a graduated approach will not have sufficient or timely impact on the trajectory and scale of the disease and will not protect the core priorities set out above.

“A graduated approach would, ultimately, result in application of level five measures as mitigation.

“In contrast, the immediate application of level five is intended to limit the impact of public health of Covid-19”.