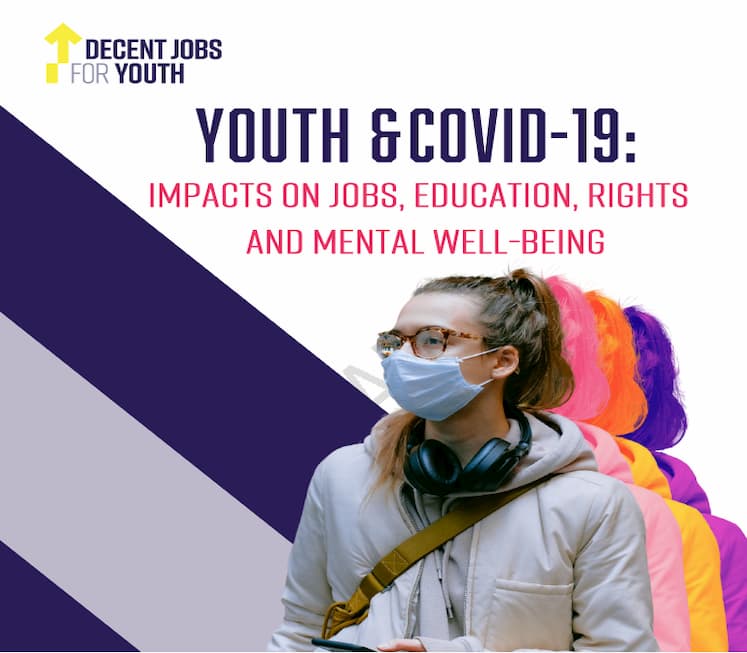 The COVID-19 pandemic has disrupted every aspect of our lives. Even before the onset of the crisis, the social and economic integration of young people was an ongoing challenge. Now, unless urgent action is taken, young people are likely to suffer severe and long-lasting impacts from the pandemic. This study reports the findings from the Global Survey on Youth and COVID-19 conducted by partners of the Global Initiative on Decent Jobs for Youth between April and May 2020. This was at the time when the COVID-19 pandemic had rapidly translated into an economic crisis. The Global Survey aimed to capture the immediate effects of the pandemic on the lives of young people (aged 18–29) with regards to employment, education, mental well-being, rights and social activism. Over 12,000 responses were received from 112 countries, with a large proportion coming from educated youth and those with Internet access. The survey population is representative of students and working youth with a tertiary education, who together account for about a quarter of youth in the countries sampled. The study finds the impact of the pandemic on young people to be systematic, deep and disproportionate. It has been particularly hard on young women, younger youth and youth in lower-income countries. Young people are concerned about the future and their place within it. This study is their story.

Of the young people who were either studying or combining study and work before the onset of the crisis, three-quarters (73 per cent) experienced school closures, yet not all were able to transition into online and distance learning. Indeed, COVID-19 left one in eight young people (13 per cent) without any access to courses, teaching or training; a situation particularly acute among youth in lower-income countries and one that serves to underline the sharp digital divides that exist between regions. Despite the best efforts of schools and training institutions to provide continuity through online delivery, 65 per cent of young people reported having
learnt less since the pandemic began, 51 per cent believe their education will be delayed, and nine per cent feared their education would suffer and might even fail. The pandemic is also inflicting a heavy toll on young workers, destroying their employment and undermining their career prospects. One in six young people (17 per cent) who were employed before the outbreak, stopped working altogether, most notably younger workers
aged 18–24, and those in clerical support, services, sales, and crafts and related trades. Working hours among employed youth fell by nearly a quarter (i.e. by an average of two hours a day) and two out of five young people (42 per cent) reported a reduction in their income. Young people in lower-income countries are the most exposed to reductions in working hours and the contraction in income that results. Occupation was found to be the main determinant for how the crisis has affected young women and men in employment differently, with young women reporting greater losses in productivity as compared to young men. Severe disruption to learning and working, compounded by the health crisis, has seen a
deterioration in young people’s mental well-being. The study finds that 17 per cent of young people are probably affected by anxiety and depression. Mental well-being is lowest for young women and younger youth between the ages of 18 and 24. Young people whose education or work was either disrupted or had stopped altogether were almost twice as likely to be probably affected by anxiety or depression as those who continued to be employed or whose education was on track. This underscores the interlinkages that exist between mental well-being, educational success and labour market integration. At the same time as recognising the importance of lockdown measures in safeguarding lives, young people also reported having seen an indirect impact on their freedom of movement. Moreover, one in three (33 per cent) noticed a marked impact on their right to participate in public affairs, while over a quarter (27 per cent) experienced difficulties in exercising their right to freedom of religion or belief. About a quarter of young people (24 per cent) felt the inaccuracies around the pandemic affected their right to access information. Basic needs were
an issue too: for a fifth of youth (21 per cent), especially the ones out of work, their right to housing was being challenged as they struggled to make ends meet. Yet in spite of this, young people remained determined to step up and partner safely and effectively with governments, social partners, civil society and other institutions to “Build Back Better”. Over one in four reported actively engaging in volunteerism (31 per cent) and in making
donations towards the COVID-19 response (27 per cent). Furthermore, young people went on to call on governments to continue enforcing containment measures, such as working from home, wherever possible. They want restrictions to be eased gradually, as for them, the health
and safety of all workers and citizens is paramount. The study presents powerful stories and statements by young people from around the globe
that include innovative ideas on how to respond to the crisis. At their core are those most at risk, from the poor, the migrant workers and the informal workers to the elderly, the health workers on the frontline and the recently unemployed. The voices, energy and resilience of young people are shaping a safe, more inclusive, equal planet for us all. To support and amplify youth voices and actions, this study calls for urgent, targeted and smarter investments in decent jobs for youth, including in the protection of young people’s human rights; employment and training guarantee programmes; social protection and unemployment insurance benefits for youth; greater efforts to boost the quality and delivery of online and distance learning; and stronger complementarities with mental health services, psychosocial support and sports activities. Only by working together, with and for youth, can we prevent the COVID-19 crisis from having not only a negative but a potentially long-lasting impact on young people’s lives.

For the full report see https://www.ilo.org/wcmsp5/groups/public/@ed_emp/documents/publication/wcms_753026.pdf