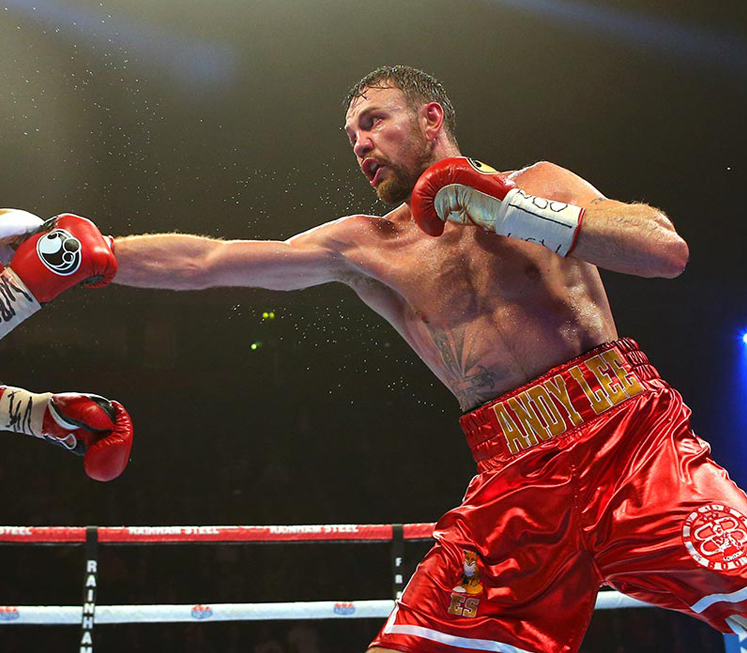 WBO middleweight champion Andy Lee has been announced as the 2014 Limerick Person of the Year at a ceremony in which rugby legend Tony Ward was made an honorary Limerickman.

The announcements were made today at a gala awards lunch in the Clarion Hotel, Limerick. With the champion currently in a training camp in Monaco preparing for his first world title defence, the award was accepted by his mother Ann, with Andy sending a special video message to guests.

He said he was “honoured and proud” to have been chosen and paid tribute to his fellow nominees.

“This really is mind blowing, this award means a lot to me,” Andy Lee said. “See you all in Limerick soon, hopefully with a successful defence of my title!”

Paying tribute to her son who had grown up in Limerick after being born in London, Ann Lee said Andy always felt like he ‘belonged’ in Limerick.

“He grew into Limerick, he considers himself a Limerick person, it’s in his head, he never belonged anywhere else,” she told invited guests. “That’s what Limerick did for Andy, it made him become the man he became. He would have loved to be here and I just want to say a huge thank you on his behalf.”

Andy Lee (30) captured the WBO title on December 13 last when he sensationally defeated Russian boxer Matt Koborov in Las Vegas. The former Olympian was later treated to a hero’s welcome in his native Limerick.

Now in its 14th year and sponsored by The Limerick Leader, Southern Marketing Design & Media and the Clarion Hotel, the Limerick Person of the Year Awards were established to honour the achievements and success of local people. Past winners include philanthropist JP McManus, rugby star Paul O’Connell, author Donal Ryan, transatlantic rower Paul Gleeson and Thomond Park developer Pat Whelan.

Forty years after he first wore the red jersey of Munster, the Dublin-born Tony Ward was presented with a framed certificate confirming him as an honorary Limerick. It recognised “the joy he has brought to the people of Sporting Limerick”, as a rugby player for Garryowen, Munster, Ireland and the British and Irish Lions and a skilful soccer player with Limerick United. It also saluted his work as a rugby commentator and journalist.

In accepting the honour, Tony commented that the vast majority of the people he meets automatically assume he was born and reared in Limerick, such is the nature of his relationship with the city where he spent the happiest years of his life.

Being made an honorary Limerick man means so much to me, this is probably the greatest personal achievement of my life,” a delighted Tony Ward said. “To receive official recognition here today has blown me away. You have no idea of the pride that I’m going to carry.”

Mayor Sheahan paid tribute to Andy Lee’s “incredible achievement” and described him as a “worthy recipient” of the prestigious award.

“The people of Limerick and Ireland have closely followed Andy’s boxing career and are immensely proud of his achievements. Andy’s world title success means he joins an elite group of Irish boxers who have each won a world title.

“Andy is a worthy recipient of this award. In honouring him today we also celebrate the contribution of St Francis Boxing Club which has played a central role in the career of a world champion, as well as Andy’s late mentor Emanuel Steward who invested his time, energy, finance and faith in the Limerick man as he crossed over from amateur to professional boxing,” said Mayor Sheahan.

Of Tony Ward, Mayor Sheahan commented: “He will always be remembered as one of Munster’s greatest players, the rugby genius who was at his brilliant best on the famous day when the All Blacks were beaten at Thomond Park in 1978. His exciting style of play was hugely appreciated by the people of Limerick and he was a fine soccer player too, winning an FAI Cup medal in 1982.”

Dave O’Hora of Southern Marketing Design & Media congratulated all, pointing out that “each of the nominees have in their own way made an outstanding contribution to the cultural, sporting, business and community scene in Limerick, today Limerick celebrates and it should.”

Limerick Leader editor Alan English commented: “This award scheme is a wonderful mechanism for the people of Limerick to show their appreciation of those who have helped to showcase the city and county in the best possible light at local, national and international level. The Limerick Leader was delighted to have been able to feature the 12 winners of the Limerick Person of the Month Awards and Andy is a worthy winner for his extraordinary achievements in becoming a world champion.”

February – The people of St Mary’s Parish for community response to devastating floods in early 2014.

March – Robbie McNamara, who enjoyed success on the double during the 2014 Cheltenham Festival.

May – Actor, director and playwright Myles Breen for his outstanding contribution to the arts in the Mid-West region.

July – Shannon Airport Chair Rose Hynes for her role in leading the turnaround at the airport since it was made independent in January 2013.

August – Margaret O’Connor for her work to help others recover from their bereavement.

October – John Collins, who at 83 years of age ran his 42nd marathon having only started running in his fifties.

Corbally native John Hartnett is a senior technology executive and investor based in Silicon Valley, California, and is founder and president of the Irish Technology Leadership Group. Over two days last January, hundreds of big decision makers from top international technological companies descended on Limerick for ITLG’s annual forum. In excess of 1,000 delegates attended the ITLG day conference at the University of Limerick. One of Mr Hartnett’s personal highlights was the ITLG Young Innovators 2014 event held in Shannon Airport where 700 secondary school students from across the country participated.

The people of St Mary’s Parish

In recognition of the monumental effort they made in fighting back following last February’s devastating floods, the people of St Mary’s parish in the city were honoured with the Limerick Person of the Month award. Hundreds of people were evacuated from their homes across the city after the “unprecedented” disaster.

Jockey Robbie McNamara enjoyed success on the double during the Cheltenham Festival in 2014. The 25-year-old Croom man recorded a memorable first win at the famous festival when partnering the Dermot Weld-trained Silver Concorde to victory in the Weathersbys Champion Bumper on March 12.And he continued on his winning ways just 24 hours later when he stormed up the Prestbury Park hill aboard Jim Culloty’s Spring Heeled in the Kim Muir Chase. Poignantly, it was in the same race that his cousin JT McNamara was seriously injured the year previously.

Cast and crew of The Passion

On Holy Thursday and Good Friday in the region of 5,000 pilgrims descended on the hillside in Nicker, Pallasgreen for a one-off re-enactment of the death of Christ. Passion 2014, which was played out in various locations in the parish – right through Holy Thursday night – involved a cast of more than 20 local people, aided by a strong production team. In the end, according to director/producer Eamonn Harty, the entire local community – a population of almost 1,000, played some part in the unique production.

Since his first introduction to theatre as a boy growing up on South Circular Road, Myles has nourished his love of life on stage and in doing so has brought audiences from all corners of the county on a journey filled with laughter, tension, tears and triumphs. The thespian, 50, has been performing, directing and writing for the past 27 years. A proud Limerick man he says he gets great satisfaction from his work with the Daughters of Charity and Limerick Youth Theatre.

The volunteers involved in the 2014 Special Olympics Games were honoured with the Person of the Month award in June. Over the course of three days, some 2,200 medals were handed out to athletes. Limerick’s hosting of the Games generated an estimated €10 million for the local economy. The success of the event prompted the chief executive of the Games, Matt English, to comment that Limerick is capable of hosting “a world event not just a national event”.

Rose Hynes, the chairman of Shannon Airport, is credited with playing a leading role in turning around the fortunes of the airport since it was made independent in January 2013. Shannon Airport won the Airport of the Year Award at the Irish Aviation Awards. Ms Hynes was also awarded the Media Merit Award at the biennial Press Ball in Limerick.

A Limerick mother whose world was torn apart when she lost both her husband and son to suicide within two years, Margaret has shown remarkable courage in helping others recover from their bereavement. In August, Margaret O’Connor did a skydive to raise funds for Console – a national organisation supporting people in suicidal crisis and those bereaved by suicide, through professional counselling.

The Limerick camogie team claimed the All-Ireland intermediate title in September having been beaten on the same stage the previous year. The team pulled off a stunning win over Kilkenny with the Croke Park scoreboard reading 1-12 to 0-10 at full-time. Captain Fiona Hickey climbed the steps of the Hogan Stand to lift the winning trophy and make amends for their final loss 12 months previous when they failed narrowly to Galway.

An inspirational runner who at 83 years of age, ran his 42nd marathon in 2014. Mr. Collins, from Church Street, King’s Island in the city, only started running in his fifties, finished the gruelling 26.2-mile Dublin City Marathon. John started running in 1980 and was 53 when he ran his first marathon. Over the years, he has competed in the Boston, New York, Connemara, Belfast, Limerick and London marathons.

Boxing titan Andy Lee was honoured with the Limerick Person of the Month award following his sensational victory in Las Vegas which saw him being crowned the WBO middleweight boxing champion of the world. The Castleconnell man who beat Russia’s Matt Korobov on a sixth round TKO (technical knockout) for the title returned home to a hero’s welcome in his home city where he was presented with his Limerick Person of the Month award.

“It’s lovely to be appreciated,” said Mike Fitzpatrick on receiving the Limerick Person of the Month award on behalf of the City of Culture team who helped to make 2014 a “fantastic year” in Limerick as Ireland’s first National City of Culture. Highlights of the year included Fuerzabruta and the renowned Royal de Luxe.

EU Cars and Light Vans to have eCall Emergency Feature in 2018.