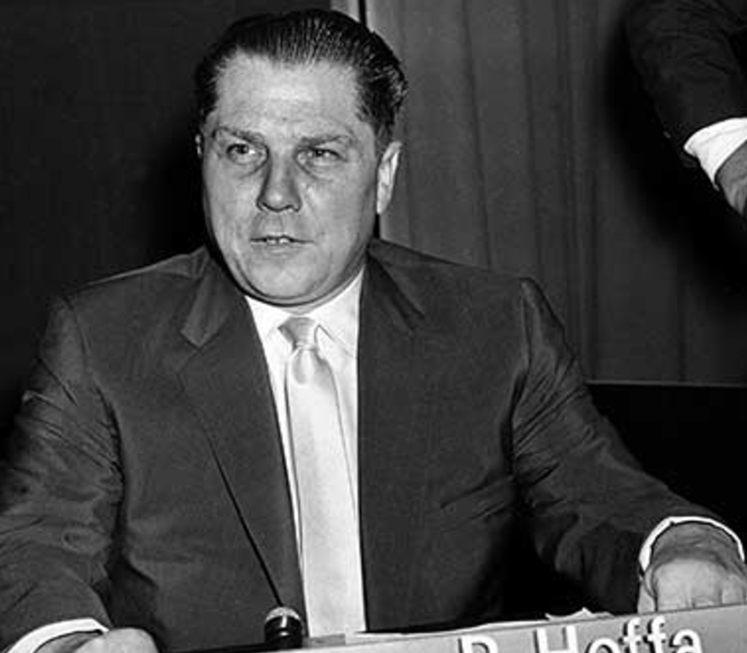 Jimmy Hoffa, in full James Riddle Hoffa, (born February 14, 1913, Brazil, Indiana, U.S.—disappeared July 30, 1975, Bloomfield Hills, near Detroit, Michigan), American labour leader who served as president of the International Brotherhood of Teamsters from 1957 to 1971 and was one of the most controversial labour organisers of his time.

The son of an Indiana coal miner who died when Hoffa was seven, Hoffa moved with his family to Detroit in 1924. He left school at age 14, worked as a stock boy and warehouseman for several years, and began his union-organizing activities in the 1930s. Initially the business agent for Local 299 in Detroit, Hoffa by 1940 had become chairman of the Central States Drivers Council and by 1942 president of the Michigan Conference of Teamsters. In 1952 he was elected an international vice president of the Teamsters, and five years later he succeeded Dave Beck as international president.

Known throughout the trucking industry as a tough and knowledgeable bargainer, Hoffa successfully centralized administration and bargaining in the international office of the union. He also played a key role in the creation of the first national freight-hauling agreement. His efforts helped make the Teamsters the largest labour union in the United States.

Known to have long associated with organized crime figures, Hoffa nevertheless survived a series of governmental prosecutions until 1967, when he entered the federal prison in Lewisburg, Pennsylvania, to begin a 13-year sentence for jury tampering, fraud, and conspiracy. Hoffa refused to resign as president of the Teamsters while in prison and kept his position until 1971. U.S. Pres. Richard M. Nixon commuted Hoffa’s sentence in December 1971, stipulating that he could not engage in any union activity until 1980. Hoffa, however, fought the restriction in court and was widely believed to have covertly continued his efforts to reestablish a union position.

On July 30, 1975, he disappeared from a restaurant in suburban Detroit under circumstances that have never been fully determined. He was said to have had an appointment at the restaurant with Anthony Provenzano, a New Jersey Teamsters official and former Mafia figure, and Anthony Giacalone, a Detroit mobster; both later denied having encountered Hoffa, who was never seen again. He was legally declared “presumed dead” in 1982.

James P. Hoffa, Jimmy Hoffa’s son, was sworn in as general president of the Teamsters on May 1, 1999, after a bitter election campaign culminated in his defeat of Ron Carey, a longtime critic of Jimmy Hoffa.

The Best Walks In And Around Dublin