Visualizing the History of Pandemics 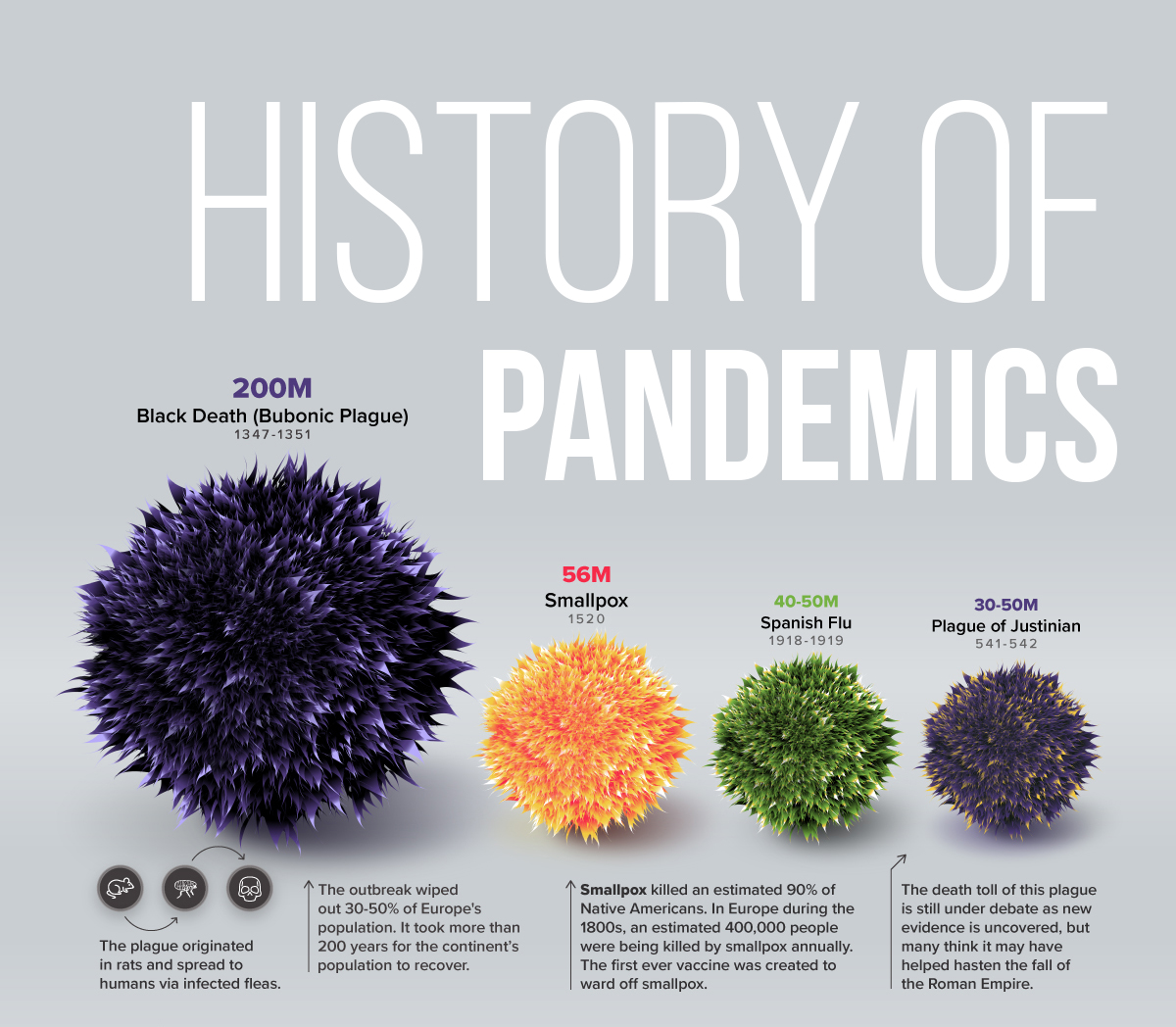 The History of Pandemics

Pan·dem·ic /panˈdemik/ (of a disease) prevalent over a whole country or the world.

As humans have spread across the world, so have infectious diseases. Even in this modern era, outbreaks are nearly constant, though not every outbreak reaches pandemic level as the Novel Coronavirus (COVID-19) has.

Today’s visualization outlines some of history’s most deadly pandemics, from the Antonine Plague to the current COVID-19 event.

A Timeline of Historical Pandemics

Disease and illnesses have plagued humanity since the earliest days, our mortal flaw. However, it was not until the marked shift to agrarian communities that the scale and spread of these diseases increased dramatically.

Widespread trade created new opportunities for human and animal interactions that sped up such epidemics. Malaria, tuberculosis, leprosy, influenza, smallpox, and others first appeared during these early years.

Here are some of the major pandemics that have occurred over time:

Note: Many of the death toll numbers listed above are best estimates based on available research. Some, such as the Plague of Justinian and Swine Flu, are subject to debate based on new evidence.

Despite the persistence of disease and pandemics throughout history, there’s one consistent trend over time – a gradual reduction in the death rate. Healthcare improvements and understanding the factors that incubate pandemics have been powerful tools in mitigating their impact.

Wrath of the Gods

In many ancient societies, people believed that spirits and gods inflicted disease and destruction upon those that deserved their wrath. This unscientific perception often led to disastrous responses that resulted in the deaths of thousands, if not millions.

In the case of Justinian’s plague, the Byzantine historian Procopius of Caesarea traced the origins of the plague (the Yersinia pestis bacteria) to China and northeast India, via land and sea trade routes to Egypt where it entered the Byzantine Empire through Mediterranean ports.

Despite his apparent knowledge of the role geography and trade played in this spread, Procopius laid blame for the outbreak on the Emperor Justinian, declaring him to be either a devil, or invoking God’s punishment for his evil ways. Some historians found that this event could have dashed Emperor Justinian’s efforts to reunite the Western and Eastern remnants of the Roman Empire, and marked the beginning of the Dark Ages.

Luckily, humanity’s understanding of the causes of disease has improved, and this is resulting in a drastic improvement in the response to modern pandemics, albeit slow and incomplete.

The practice of quarantine began during the 14th century, in an effort to protect coastal cities from plague epidemics. Cautious port authorities required ships arriving in Venice from infected ports to sit at anchor for 40 days before landing — the origin of the word quarantine from the Italian “quaranta giorni”, or 40 days.

One of the first instances of relying on geography and statistical analysis was in mid-19th century London, during a cholera outbreak. In 1854, Dr. John Snow came to the conclusion that cholera was spreading via tainted water and decided to display neighborhood mortality data directly on a map. This method revealed a cluster of cases around a specific pump from which people were drawing their water from.

While the interactions created through trade and urban life play a pivotal role, it is also the virulent nature of particular diseases that indicate the trajectory of a pandemic.

Scientists use a basic measure to track the infectiousness of a disease called the reproduction number — also known as R0 or “R naught.” This number tells us how many susceptible people, on average, each sick person will in turn infect.

Measles tops the list, being the most contagious with a R0 range of 12-18. This means a single person can infect, on average, 12 to 18 people in an unvaccinated population.

While measles may be the most virulent, vaccination efforts and herd immunity can curb its spread. The more people are immune to a disease, the less likely it is to proliferate, making vaccinations critical to prevent the resurgence of known and treatable diseases.

It’s hard to calculate and forecast the true impact of COVID-19, as the outbreak is still ongoing and researchers are still learning about this new form of coronavirus.

Urbanization and the Spread of Disease

We arrive at where we began, with rising global connections and interactions as a driving force behind pandemics. From small hunting and gathering tribes to the metropolis, humanity’s reliance on one another has also sparked opportunities for disease to spread.

Urbanization in the developing world is bringing more and more rural residents into denser neighborhoods, while population increases are putting greater pressure on the environment. At the same time, passenger air traffic nearly doubled in the past decade. These macro trends are having a profound impact on the spread of infectious disease.

As organizations and governments around the world ask for citizens to practice social distancing to help reduce the rate of infection, the digital world is allowing people to maintain connections and commerce like never before.

Editor’s Note: The COVID-19 pandemic is in its early stages and it is obviously impossible to predict its future impact. This post and infographic are meant to provide historical context, and we will continue to update it as time goes on to maintain its accuracy.

Infection Trajectory: See Which Countries are Flattening Their COVID-19 Curve