The Phoenix Park – from the Georgian Period to the Present 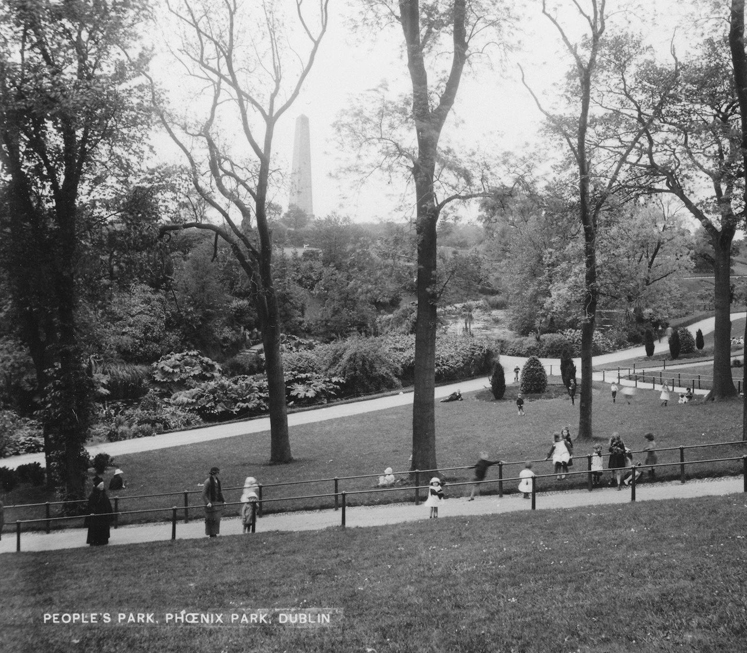 The Eighteenth Century and the Chesterfield Era

The 4th Earl of Chesterfield was appointed Lord Lieutenant of Ireland in January 1745, and is credited with initiating a series of landscape works, many of which were probably not completed until after his short tenure, having been recalled to London more than a year later. These included considerable replanting of the Park as well as planting of trees on either side of the main avenue and the erection of the Phoenix Column in 1747. He is also credited with opening the Park to the public.

The dominant eighteenth-century managerial and infrastructural characteristics of the Phoenix Park were reflected in the extensive use of the Park by the military and the number of lodges used by government officers and other lesser officials involved in Park management. Apart from the use of the Park for military manoeuvres and practices, there were also a number of military institutions which included the Royal Hibernian Military School (1766) for children who were orphaned, or whose father was on active military service abroad. The Magazine Fort, constructed in 1736 with additions in 1756, was a major military institution from which small arms, munitions and gunpowder were distributed to other military barracks in the Dublin area. Mountjoy Cavalry Barracks (formerly the home of Luke Gardiner, one of the Keepers of the Park) and the Royal Military Infirmary were two further buildings constructed during the eighteenth century, in 1725 and 1786 respectively. The role of the Salute Battery (for firing cannon on Royal and other special occasions), situated in the environs of the Wellington Testimonial, was discontinued, and the lands it occupied within the Park subsequently became known as the Wellington Fields, and on which the Wellington Testimonial was erected.

All the important lodges and accompanying demesnes, which were originally occupied by Park Rangers or Keepers, were purchased for Government use as private dwellings for the chief officers of state. These included the Viceregal Lodge for the Lord Lieutenant (now Áras an Uachtaráin), the Chief Secretary’s Residence (now the residence of the U.S. Ambassador to Ireland) and the Under-Secretary’s Residence (subsequently the Papal Nunciature and now the Phoenix Park Visitor Centre).

The Nineteenth Century and the Decimus Burton Era

The beginning of the nineteenth century saw the Park in a much-neglected state with poor drainage, the roads in bad order, and most of the trees very old and/or in a state of decay. However with the Commissioners of Woods and Forests taking over the management of the public areas of the Park and the employment of the renowned architect/landscape architect, Decimus Burton, all this was about to change. Burton produced a master plan for the Park which included the building of new gate lodges, the removal and levelling of old hedgerows and shooting butts, tree planting in strategic locations, drainage, the restoration of the boundary wall, creation and realignment of the Park roads, which included Chesterfield Avenue. This latter project involved the relocation of the Phoenix Column on the main avenue. Burton’s involvement for nearly two decades represents the greatest period of landscape change since the Park’s creation by the Duke of Ormond.

Further improvements were undertaken following the transfer of management of the Phoenix Park to the Office of Public Works in 1860, the first of which included the completion of the outstanding works associated with the Wellington Testimonial which was commenced in 1818. Two further memorials of considerable artistic merit were unveiled: one in 1870 commemorating the Lord Lieutenancy of the Earl of Carlisle, and the other an equestrian statue commemorating Field Marshal Viscount Gough which was unveiled in 1880. Both of which were sculpted by John Henry Foley.

From the 1830s and particularly after the 1860s, sporting and recreational activities became prominent. The Royal Dublin Zoological Society opened Dublin Zoo in 1830. The Promenade Grounds opened in 1840 (later to be known as the People’s Garden) and were considerably improved in the 1860s with the addition of a Head Gardener’s House, rock garden, and horticultural facilities to allow for flower production for planting in the Gardens. Between the People’s Garden and Dublin Zoo, a bandstand and tearooms were built in the final decade of the nineteenth century.

Although the military dominated the Park’s institutions and Park use in the 18th century, their influence was lessened somewhat in the nineteenth century (though Mountjoy Barracks became the Irish headquarters of the Ordnance Survey in 1825). The presence of the police became more prominent, as illustrated by the construction in 1842 of the Royal Irish Constabulary depot near the North Circular Road entrance to the Park, and two police barracks – one at Ashtown Gate and the other at Parkgate Street. In 1848 the Commissioners of Woods and Forests further met their social obligations by providing for the educational needs of the Park’s children by building a school house and teacher’s residence to the designs of Decimus Burton.

The history and landscape management of the Phoenix Park in the twentieth century is characterised primarily by the replanting of trees and shrubs that took place in the first decade, due to the great storm in 1903 which was responsible for the demise of nearly 3,000 trees. Another 10,000 trees were planted as part of the 1986 management plan and considerable arboricultural works were carried out on the mature tree population in the latter quarter of the century. The erection of the Papal Cross in 1979, the relocation of the Phoenix Column and the re-erection of the entrance gate piers and linking walls at Parkgate St, were also significant projects that were undertaken towards the end of the twentieth century.

The Phoenix Park was also the location for a number of major national and international events during the twentieth century. These events, which were of a spiritual, cultural, sporting and charitable nature, commenced in 1903 with motor racing and a major international motor racing event in 1929. In the same year, the centenary of Catholic Emancipation took place, followed in 1932 with the 31st Eucharistic Congress. The template for the latter event was used to host the Papal visit of Pope John Paul II in 1979 when more than one million people attended the celebrations. Other notable gatherings included Bob Geldoff’’s ‘Live Aid’ walk in 1986 and the finish of the first stage of the Tour de France, which was held for the first time in Ireland in 1997. Throughout the twentieth century, the Park has been used for a large range of day-to-day sporting and recreational activities.