The History of the Fire Services in Germany 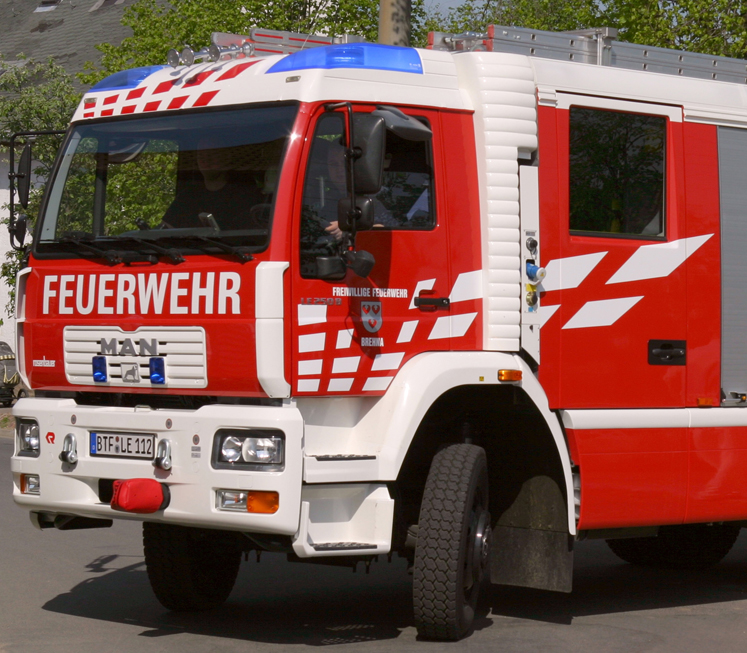 The importance and bravery of firefighters is often forgotten in history. Their actions saved a countless number of lives, not only in Ireland. How did the Fire Services develop throughout history in other countries? For example, Germany?

Before there were major organised Fire Services

In early May of 1842, the free city of Hamburg suffered what is now considered to be one of the most severe fires in German history. Raging on for three days, the inferno destroyed large parts of the old town, 71 streets, 1800 houses and 4200 apartments, three churches, two synagogues, and claimed the life of 51 people, as well as leaving 20 000 survivors homeless.

The fire started in the residence of a local cigar maker and was detected early on by night guards, yet the quickly alarmed “Spritzenleute” – who were already founded in 1761 to combat the cities fires – couldn’t extinguish the flames even in its early stages.

The unorganized group of untrained men was powerless against the quickly spreading blaze and had to watch as the neighbourhoods to the north and west of the fire’s source perished. Even when additional “Spritzenleute” from nearby towns such as Lübeck and Kiel came to their aid, they only managed to save a small area from the inferno.

City officials finally resorted to a solution they rejected before: Using explosives to create a gap the flames couldn’t cross. The fire could only be contained after several buildings, including the town hall, were blown up. On May 8th, the nightmare was finally over and the street where the last flames died out was then called “Brandsende”, literally “Fire’s end”.

In 1799, Germany’s first volunteer’s fire service was founded in the city of Alzey in Rhineland-Palatinate, but it still took until the middle of the 19th century for Germany to catch up to its neighbours in terms of fire protection and fighting.

After the German revolution in 1848/49, suddenly fire stations seemed to sprout from the ground. Historians attribute this sudden change in attitude towards firefighting to the need of the upper-class citizens to remain in power wherever they could, after emancipation and liberation was promised to the people by German monarchs. The ongoing industrialisation only increased the risk of fire, due to unsafe factories and cramped living spaces, so the newly established fire services were badly needed.

The first official “Berufsfeuerwehr” (professional fire brigade) was founded in 1851 in Berlin, 9 years after the devastating fire of Hamburg. As was typical for the time, firefighters used horse drawn carriages to transport their water pumps, but at the beginning of the 20th century most brigades switched to automotive transportation.

In their early stages, fire brigades weren’t in possession of protective clothes and wore a simple uniform with a hat and a pair of gloves. Most of the time, the firefighters even had to pay for the uniform themselves.

The Fire Services kept evolving steadily until the end of the 1920s until the rise of the Nazi party. 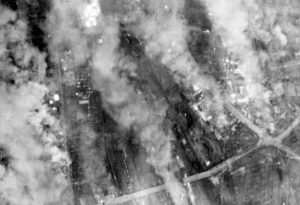 During the fire of the Old Synagogue in the night of the 9th November 1938, fire fighters were instructed only keep the flames from spreading to surrounding buildings. Both stars of David, who were falsely assumed to be made of real gold, were taken by the police and fire brigade respectively. Soon after, the firefighter Alfred Neugebauer took the star of David from the fire station and hid it, so it could outlive the NS-Regime and later be returned to the Jewish community of Dresden.

Dresden was one of the most heavily bombed German cities during the war; the first bombs were dropped by the allied forces in October 1944, killing 435 people. The second attack was mid-January 1945, while the city was filling with refugees primarily from Silesia and many schools and guesthouses were converted into makeshift hospitals.

The situation didn’t change and the city was hit with a volley of attacks on the 13, 14, and 15 February 1945. 1300 planes bombarded Dresden with about 3 890 tons of explosives and incendiaries. The type of bombs used transformed Dresden into a sea of flames that wouldn’t be extinguished for another five days.
Now in his 80s, Arthur Merzdorf was part of the “Feuerschutzpolizei” as the Fire Service was called back then. His squad responded to the fires caused by the bombings.

“That night started like always when there were air raid warnings. We got into position with our fire engines, but after the roaring in the air and the ghastly marker lights we soon realized that Dresden wouldn’t be let off lightly. After the first attack the victims were burning, the Gemäldegalerie, the Cathedral, the Schlossgebäude. Our Dresden…! We were sent to extinguish fires at the restaurant “Italienisches Dörfchen”. But after a short time the instruction came to pack up and to reform at the burning mansion of the Gauleiter Mutschmann. On our way we passed houses from which flames burned metres high, we passed two walls with burning Phosphor. We reached our target and took two hours to extinguish the fire.”

During that time, we were surprised by the second attack and hid in the nearest bunker. The explosions of the bombs shook the earth beneath our feet. Once we crawled back outside our fire engines were gone. Two direct hits.

Afterwards we helped – to the best of our abilities – without technology. It was a hopeless fight against the sea of flames anyways. On our way back, after 24 hours of work without a break, we still wanted to help people in the air raid bunkers downtown.

But they sat silent and covered in dust shoulder to shoulder, as if they were sleeping. Death by fumes and lack of oxygen. What happened here during the fire? A woman was leaning in the entrance, in her extended arm a toddler. Both dead.”

Doctor Heinz-Eberhard Schneider, now a zoo veterinarian, was deployed as an air raid alarm that day in Dresden and also remembers the fruitless efforts of the fire service. 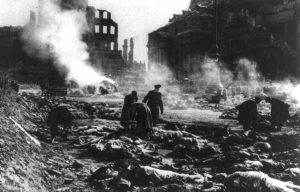 “The pre-alarm was done. I took my steel helmet and ran to the basement of the air raid warden in the Stübelallee-Street. He wrote me a note that I was supposed to take to the fire station in the Schlüterstraße-Street. Content: A request for three fire engines. I took a route that let me examine our house. It was still standing, covered, my father – a doctor – already on his way to the hospital. Close to the Borsbergstraße-Street was a particularly bad fire. I met a helpless group of firemen who sprinkled the flames without any effect. That’s where I passed on the note. The fire chief looked at me angrily and shouted against the crackling of the fire: ‘You stupid pig, the whole city is burning and you of all people want three fire engines! Make sure you get out of the city, I’m telling you, the ‘birds’ will be back soon.’ And he was right.”

At least 35 000 people died, predominantly women, children and the elderly. 14 000 houses were destroyed completely. The Dresden fire brigade lost 97 fire engines during the air raids in February 1945. The professional fire brigade mourned the deaths of 107 fire fighters, not counting the supporting forces from other parts of Saxony. Despite the losses, the fire brigade was the only unit that was able to keep their personnel together until the arrival of the Red Army.

Their bravery and steadfastness was proven again when Dresden firefighters refused the direct order to keep the war going by arming themselves. Not one member of the Dresden fire services ever took part in direct acts of war.

After the end of the war, the Fire Services hat to be rebuilt from the ground up. With permission of the occupying forces and use of the available resources, service was resumed in four fire stations. After some time, stolen equipment was returned and the occupying forces gave some of their machines to the local Fire Brigade.

Fire Services in the GDR 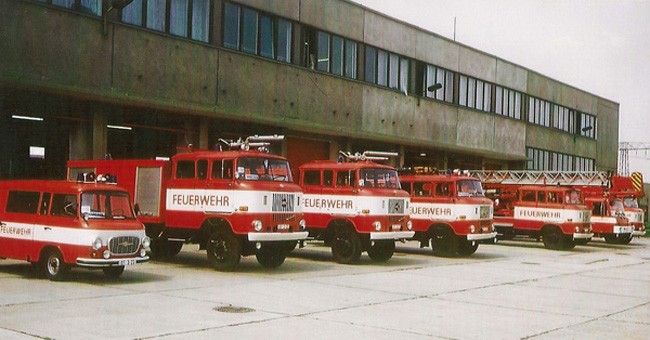 After the founding of the states in the Soviet Occupation Zone, the responsibilities of maintaining the Fire Services was transferred to each state individually. The previously existing laws were replaced with new ones.

The GDR also participated in the CTIF – the fire services Olympiad. A team of professional firefighters was sent every four years and always returned successful.

Today, the Fire Services are the most trusted institution in Germany and a study shows that to German citizens, only nurses and pilots come close on the scale of trustworthiness.

As a statistic from 2015 shows, there are currently 24000 volunteer’s fire stations nationwide, which form the backbone of German fire security. Additionally they take further responsibilities in First-Aid and disaster prevention. Their key tasks are: Saving, extinguishing, retrieving and protecting.

About 30% of Germany’s population lives in the city, making the 107 professional fire brigades insufficient for adequate protection. Especially in rural areas the volunteers are able to respond faster to emergencies. They aid the professional fire fighters in their duties and provide replacements during conflagrations.

In places that are home to both a professional and a volunteer’s fire brigade, the fire chief of the professional brigade is always in charge.

Everyone can volunteer to be a fire fighter, as long as they’re between the age of 16 and 60 and pass a health exam that proves they are physically and mentally able to participate. If someone passes, they are required to take part in training, education courses and assignments. There are firefighting schools in every federal state for training.

Apple fined for slowing down old iPhones February 10, 2020 by admin Comments Off