State of Emergency In Southern California After Massive Oil Spill.

A state of emergency has been declared in Southern California following one of the largest oil spills to hit the Santa Barbara coast in over 46 years.   The 21-inch-wide pipeline, the property of PAA.N (Plains All American Pipeline), burst for reasons unknown on Tuesday morning, and oil began to flow steadily into the Pacific via Refugio State Beach.   The pipe was running at a rate of about 84,000 gallons an hour when it broke, and it is estimated that about 400,000 litres may have spilled from it.   Two oil slicks, stretching nine miles, formed along the coast, and Californian Governor Gerry Brown declared the state of emergency on Wednesday to “quickly mobilize all available resources.” 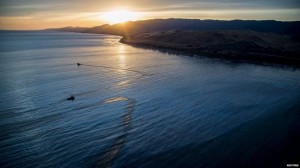 Emergency cleanup  crews fanned across Refugio Beach to clean up after the spill which Janet Wolfe, chairwoman of the Santa Barbara Board of Supervisors,  called ” a disaster” and “worst-nightmare” scenario.   Environmentalists have been particularly concerned as the spill occurred at the edge of a national marine sanctuary which is home to 25 mammal species and 60 species of sea bird.  The oil spill is believed to the largest on the Californian coast since  the 1969 California oil spill, a disaster which killed an estimated 3,500 sea birds, as well as dolphins, seals, and sea lions.  Public outrage over the incident galvanized environmental legislation that continues to form the legal and regulatory framework for the U.S. oil industry to this day.

Mount Everest: A Continuing Story of Adventure, Achievement, and Tragedy