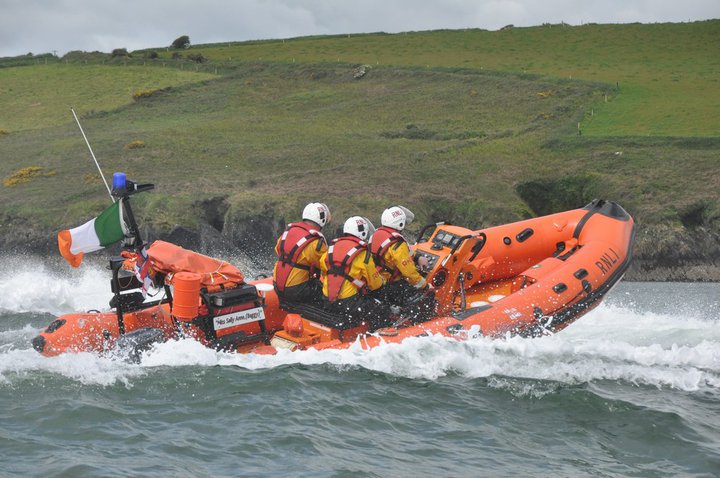 A lifeboat crew from Kinsale RNLI have stressed the importance of wearing lifejackets after saving an adult, five children and a dog off the Cork coast in a matter a few hours.

The volunteer crew of Kinsale lifeboat station were called out on Sunday to assist five young children and an adult on board a stricken vessel, before being tasked less than two hours later to save a dog which had fallen down a cliff face.

The Kinsale lifeboat Miss Sally Anne ‘Baggy’ was launched first around 2pm to assist a cabin cruiser with engine failure in Kinsale harbour.

The vessel, with one adult and five children on board, had drifted onto rocks.

All were all wearing lifejackets and were found to be safe and well when the lifeboat arrived on scene.

Because of the jagged shoreline, the lifeboat could not manoeuvre close enough to the stricken craft so an RNLI crewmember entered the water and attached a towline.

The crippled boat was towed off the rocks and brought alongside the lifeboat, before being towed to the safety of Kinsale marina.

At 3.45pm, the lifeboat was launched once more, in response to reports of a small dog trapped on rocks near Castlepark marina.

Again, a crew member had to enter the water and swim towards the rocks where he managed to bring the terrified dog to safety.

The dog was brought back to the lifeboat station where an emergency supply of dog biscuits kept him happy until he was reunited with his grateful owner.

Kinsale RNLI spokesperson, Tricia McLernon, said they were delighted everything worked out well.

“Safety at sea is the theme of the RNLI’s Respect the Water campaign so we were relieved that the adult and five children involved in our first rescue were all wearing lifejackets,” she said.

“We cannot overstate the importance of being safely equipped on the water.”

“Always carry a means of communication, always wear a lifejacket, and always tell someone on shore where you are going and when you expect to return.”

Patients encouraged to participate in National Experience Survey before deadline

Lifeguards at Co Clare beach to use drones