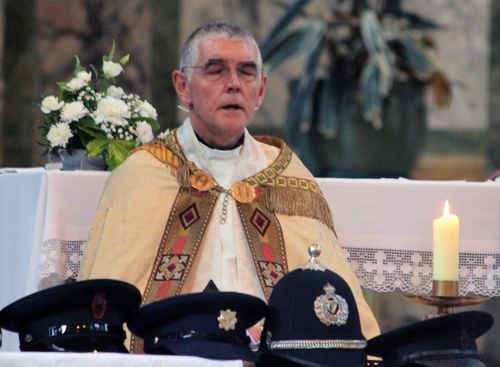 Born in 1956, David Pierpoint was educated at St Patrick’s Cathedral Grammar School and undertook a further year’s study in ethics and sociology at Cambridge University. He was appointed archdeacon of Dublin in 2004 and has a Masters degree in Management and Leadership.

The archdeacon of Dublin, by virtue of his office is ex officio on many committees and boards but has also been elected to serve on others. He also represents the Church of Ireland in the world of health care, politics and the church locally and nationally and has represented the archbishop on many public occasions. He currently serves on the board of the Rotunda Hospital, Tallaght Hospital and has been Chaplain at St James’s Hospital since 1992 (some 24 years) and with this experience in the health service he produced an important policy document for the HSE for the accreditation of hospital chaplains.

David has served on many board committees in Tallaght Hospital such as chair of the Audit committee, member of the Finance committee and in more recent times as chair of the Governance Committee. Archdeacon Pierpoint is also chaplain to An Garda Siochana, a position he has held for 16 years. He is the first Church of Ireland clergyman to hold this position and has represented the force on at least two occasions overseas as well as local and national policing events.

He is highly regarded in both political and legal circles due to his many dealings in both areas. He obtained his M.A. from Dublin City University in 2007 having studied Management in All Hallows College which incorporated Finance, Human Resources and Leadership. His pastoral skills, dealing with the media, his people skills and administrative ability are well documented.