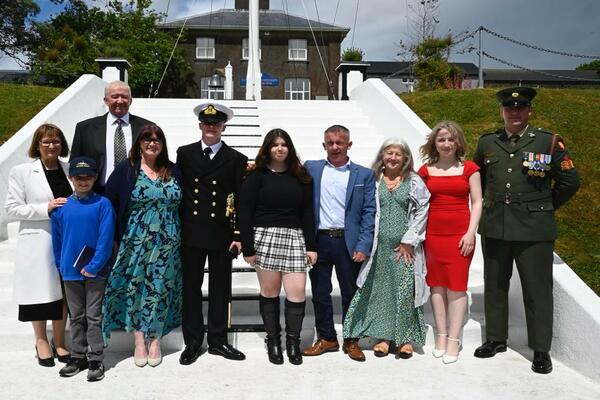 Minister for Defence Simon Coveney attended this year’s Naval Service Commissioning Ceremony at the Naval base in Haulbowline, County Cork where cadets of the 60th class were appointed to be Officers of the Permanent Defence Force.

Addressing the newly commissioned Officers, Minister Coveney thanked them for their commitment and service, as they embed themselves into life in the Irish Naval Service, “this is a celebration of real achievement for the 60th Cadet Class. It marks a great milestone in the lives of these young officers who have pledged their loyalty to the State and its citizens. The people of Ireland can truly be proud of the wonderful work carried out by the Naval Service and I wish the 4 individuals before me every continued success with their endeavours.”

Minister Coveney highlighted the rewarding nature of a career in the Defence Forces, which is demanding career but a fulfilling one, “as Minister, I want to say that the State recognizes and values you and all of your colleagues: the men and women of Oglaigh na hÉireann.”

The 60th Cadet Class were inducted into the Irish Naval Service in September 2020 and began their training in the Officer Training School. In the first 2 weeks, the 60th Cadet Class were introduced to the Naval Service by spending time on board LÉ George Bernard Shaw before moving to the Cadet School at the Military College in the Curragh Camp, Kildare. Here, the Cadets were trained as infantry soldiers, focusing on drill, marksmanship, military discipline, fitness and land navigation. In December 2020, the 60th Cadet Class moved back to Haulbowline to begin Phase 2 of their Training.

Phase 2 of training commenced in January 2021. This ‘Marinisation’ phase saw the Cadets studying navigation while also completing a range of courses such as: Engineering, Communications, Fisheries, Gunnery and Strategic Studies.

The 60th Cadet joined LÉ Samuel Beckett to commence phase 3 of their training.

Phase 4 followed, with the 60th Cadet Class studying in the National Maritime College of Ireland (NMCI) in Ringasciddy.

Every day in college, the Cadets also trained and practiced their pilotage skills in the simulators, with the target of becoming competent enough to navigate a ship for the first time. After 22 months of training, the 60th Cadet Class will take the next step in their careers.