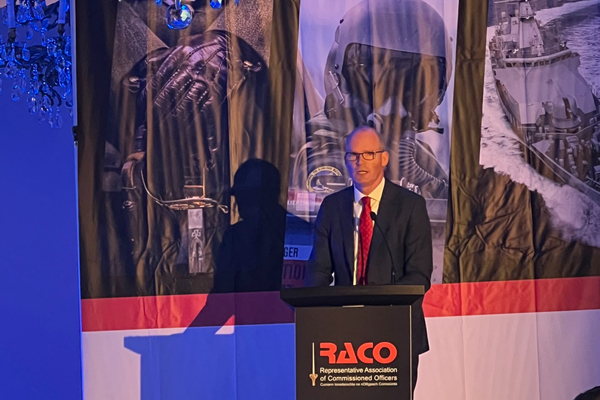 Minister Coveney welcomed the opportunity to address delegates on a number of key issues facing the Defence Forces. The Minister highlighted the significant developments for the Defence Forces that have taken place this year, including the publication of the Report of the Commission on the Defence Forces and the approval by Government of a High Level Action Plan in July, which set out a road map for way forward.

The Minister pointed towards the largest annual funding increase ever achieved for Defence, and underlined to RACO that its members will be key to implementing the Report’s recommendations.

Minister Coveney underlined the key role to be played by RACO members in the Report’s implementation, “as leaders, the role you will play in this once-in-a-generation change cannot be overstated. You are the Management, you are the critical success factors in driving the change in the Defence Forces of which you are justifiably proud to be leaders of. I know that I can rely on you, as the State has done in the past, to step up to this task and lead this management and transformation effort – the most seismic transformation in Defence provision since the foundation of the State.”

In conclusion, the Minister paid tribute to the central role that the Defence Forces play at both national and international level, adding that Ireland’s ongoing excellent reputation in the field of international peacekeeping has continued in 2022.