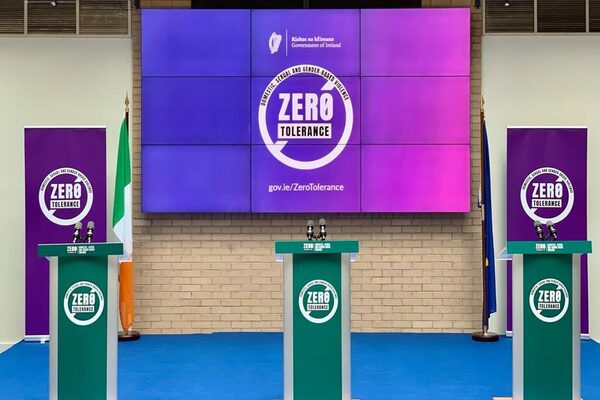 The government has published the Zero Tolerance strategy. Led by Minister for Justice Helen McEntee, it is an ambitious 5-year programme of reform to achieve a society which does not accept domestic, sexual and gender-based violence or the attitudes which underpin it.

The €363 million strategy is built on 4 pillars – Protection, Prevention, Prosecution and Policy Co-ordination – and the accompanying implementation plan contains 144 detailed actions to be implemented this year and next through new oversight structures. This will ensure that evZero Tolerance Strategyerything that is promised in the plan is delivered according to the clear timelines that have been set out.

Its central aim is Zero Tolerance of domestic, sexual and gender-based violence in our society.

The actions are drawn from across government departments and State agencies to reflect the fact that Zero Tolerance can only be achieved through a whole of society effort, and that domestic, sexual and gender-based violence cannot be treated as a criminal justice issue alone.

The Zero Tolerance strategy also seeks to clearly identify children and young people as both witnesses and victims and survivors.

The strategy was approved by Cabinet and launched by Taoiseach Micheál Martin, Minister for Justice Helen McEntee and Minister for Children, Equality, Disability, Integration and Youth Roderic O’Gorman.

An implementation plan, as also approved by the government for the first 18 months was published by the Minister, with annual action plans to follow for every subsequent year of the lifetime of the Zero Tolerance strategy.

Speaking at the launch of the strategy, Taoiseach Micheál Martin said, “the launch of the third Domestic Sexual Gender-Based Violence strategy is an incredibly important moment for our country. It signals the government’s determination to affirm and protect some of our most vulnerable people. It will accomplish this through a comprehensive set of actions reaching across Government, spearheaded by a dedicated new Agency with oversight from the Department of the Taoiseach.”

“Its ambitions extend to many parts of our society from education, to healthcare, and into our workplaces to name a few. Every sector has a part to play in calling out and taking action against DSGBV so that, once and for all, we reject the outmoded beliefs on which it rests.”

Minister McEntee said, “Zero Tolerance means we don’t turn a blind eye to violence and abuse just because it’s behind closed doors. It means we don’t laugh off inappropriate touching or comments. It means we teach our children equality and respect from a young age. We will strive for Zero Tolerance through greater education and awareness to change attitudes and teach respect. By supporting victims with compassion when they take the brave step and come forward to seek our help. With effective punishment for perpetrators. And with a sustained will and dedication to bring about the change we need.”

“This strategy is the most ambitious to date in seeking to bring about that change. It will see the fastest ever expansion of refuge spaces and improved services and support for victims through a €363 million investment, and updated primary and secondary school curricula to include consent, coercive control, domestic violence and safe use of the internet.”

“It has been developed with those working in the sector and on the frontline with victims. The knowledge and experience of these groups has been crucial in drafting this plan, and will be central to its implementation over the next 5 years. It has also been developed with the pain and suffering of too many victims at the forefront of our thoughts – we commit to them and their memories, and to each other, that we will work towards Zero Tolerance as our ultimate goal.”

Minister O’Gorman added, “I welcome the introduction of the Third National Strategy on DSGBV. This Strategy is the culmination of months of collaborative work between government departments, Tusla and organisations in the DSGBV sector. The Strategy is ambitious and far-reaching, and will go a long way to protect and support all victims of DSGBV.”

“I am glad to see that many of the recommendations from the Review of Accommodation for Victims of Domestic Violence, published by Tusla, have been incorporated into the Strategy and in due course will make for a significant expansion of refuge places, improving availability of DSGBV service nationwide. I look forward to working with partners in Government, Tusla and the sector to progress this strategy and make Ireland a safer place for all.”