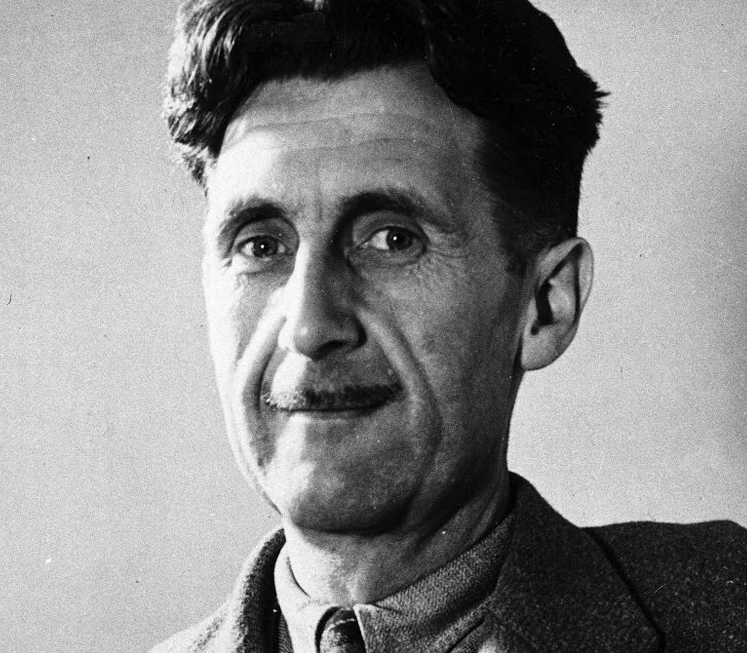 Born Eric Arthur Blair, Orwell never entirely abandoned his original name, but his first book, Down and Out in Paris and London, appeared in 1933 as the work of George Orwell (the surname he derived from the beautiful River Orwell in East Anglia). In time his nom de plume became so closely attached to him that few people but relatives knew his real name was Blair. The change in name corresponded to a profound shift in Orwell’s lifestyle, in which he changed from a pillar of the British imperial establishment into a literary and political rebel.

He was born in Bengal, into the class of sahibs. His father was a minor British official in the Indian civil service; his mother, of French extraction, was the daughter of an unsuccessful teak merchant in Burma (Myanmar). Their attitudes were those of the “landless gentry,” as Orwell later called lower-middle-class people whose pretensions to social status had little relation to their income. Orwell was thus brought up in an atmosphere of impoverished snobbery. After returning with his parents to England, he was sent in 1911 to a preparatory boarding school on the Sussex coast, where he was distinguished among the other boys by his poverty and his intellectual brilliance. He grew up a morose, withdrawn, eccentric boy, and he was later to tell of the miseries of those years in his posthumously published autobiographical essay, Such, Such Were the Joys (1953).

Orwell won scholarships to two of England’s leading schools, Wellington and Eton, and briefly attended the former before continuing his studies at the latter, where he stayed from 1917 to 1921. Aldous Huxley was one of his masters, and it was at Eton that he published his first writing in college periodicals. Instead of matriculating at a university, Orwell decided to follow family tradition and, in 1922, went to Burma as assistant district superintendent in the Indian Imperial Police. He served in a number of country stations and at first appeared to be a model imperial servant. Yet from boyhood he had wanted to become a writer, and when he realized how much against their will the Burmese were ruled by the British, he felt increasingly ashamed of his role as a colonial police officer. Later he was to recount his experiences and his reactions to imperial rule in his novel Burmese Days and in two brilliant autobiographical sketches, “Shooting an Elephant” and “A Hanging,” classics of expository prose.

In 1927 Orwell, on leave to England, decided not to return to Burma, and on January 1, 1928, he took the decisive step of resigning from the imperial police. Already in the autumn of 1927 he had started on a course of action that was to shape his character as a writer. Having felt guilty that the barriers of race and caste had prevented his mingling with the Burmese, he thought he could expiate some of his guilt by immersing himself in the life of the poor and outcast people of Europe. Donning ragged clothes, he went into the East End of London to live in cheap lodging houses among labourers and beggars; he spent a period in the slums of Paris and worked as a dishwasher in French hotels and restaurants; he tramped the roads of England with professional vagrants and joined the people of the London slums in their annual exodus to work in the Kentish hopfields.

Those experiences gave Orwell the material for Down and Out in Paris and London, in which actual incidents are rearranged into something like fiction. The book’s publication in 1933 earned him some initial literary recognition. Orwell’s first novel, Burmese Days (1934), established the pattern of his subsequent fiction in its portrayal of a sensitive, conscientious, and emotionally isolated individual who is at odds with an oppressive or dishonest social environment. The main character of Burmese Days is a minor administrator who seeks to escape from the dreary and narrow-minded chauvinism of his fellow British colonialists in Burma. His sympathies for the Burmese, however, end in an unforeseen personal tragedy. The protagonist of Orwell’s next novel, A Clergyman’s Daughter (1935), is an unhappy spinster who achieves a brief and accidental liberation in her experiences among some agricultural labourers. Keep the Aspidistra Flying (1936) is about a literarily inclined bookseller’s assistant who despises the empty commercialism and materialism of middle-class life but who in the end is reconciled to bourgeois prosperity by his forced marriage to the girl he loves.

Orwell’s revulsion against imperialism led not only to his personal rejection of the bourgeois lifestyle but to a political reorientation as well. Immediately after returning from Burma he called himself an anarchist and continued to do so for several years; during the 1930s, however, he began to consider himself a socialist, though he was too libertarian in his thinking ever to take the further step—so common in the period—of declaring himself a communist.

From The Road to Wigan Pier to World War II

Orwell’s first socialist book was an original and unorthodox political treatise entitled The Road to Wigan Pier (1937). It begins by describing his experiences when he went to live among the destitute and unemployed miners of northern England, sharing and observing their lives; it ends in a series of sharp criticisms of existing socialist movements. It combines mordant reporting with a tone of generous anger that was to characterize Orwell’s subsequent writing.

By the time The Road to Wigan Pier was in print, Orwell was in Spain; he went to report on the Civil War there and stayed to join the Republican militia, serving on the Aragon and Teruel fronts and rising to the rank of second lieutenant. He was seriously wounded at Teruel, with damage to his throat permanently affecting his voice and endowing his speech with a strange, compelling quietness. Later, in May 1937, after having fought in Barcelona against communists who were trying to suppress their political opponents, he was forced to flee Spain in fear of his life. The experience left him with a lifelong dread of communism, first expressed in the vivid account of his Spanish experiences, Homage to Catalonia (1938), which many consider one of his best books.

Returning to England, Orwell showed a paradoxically conservative strain in writing Coming Up for Air (1939), in which he uses the nostalgic recollections of a middle-aged man to examine the decency of a past England and express his fears about a future threatened by war and fascism. When World War II did come, Orwell was rejected for military service, and instead he headed the Indian service of the British Broadcasting Corporation (BBC). He left the BBC in 1943 and became literary editor of the Tribune, a left-wing socialist paper associated with the British Labour leader Aneurin Bevan. At this period Orwell was a prolific journalist, writing many newspaper articles and reviews, together with serious criticism, like his classic essays on Charles Dickens and on boys’ weeklies and a number of books about England (notably The Lion and the Unicorn, 1941) that combined patriotic sentiment with the advocacy of a libertarian, decentralist socialism very much unlike that practiced by the British Labour Party.

In 1944 Orwell finished Animal Farm, a political fable based on the story of the Russian Revolution and its betrayal by Joseph Stalin. In the book a group of barnyard animals overthrow and chase off their exploitative human masters and set up an egalitarian society of their own. Eventually the animals’ intelligent and power-loving leaders, the pigs, subvert the revolution and form a dictatorship whose bondage is even more oppressive and heartless than that of their former human masters. (“All animals are equal, but some animals are more equal than others.”) At first Orwell had difficulty finding a publisher for the small masterpiece, but when it appeared in 1945, Animal Farm made him famous and, for the first time, prosperous.

Animal Farm was one of Orwell’s finest works, full of wit and fantasy and admirably written. It has, however, been overshadowed by his last book, Nineteen Eighty-four (1949), a novel he wrote as a warning after years of brooding on the twin menaces of Nazism and Stalinism. The novel is set in an imaginary future in which the world is dominated by three perpetually warring totalitarian police states. The book’s hero, the Englishman Winston Smith, is a minor party functionary in one of those states. His longing for truth and decency leads him to secretly rebel against the government, which perpetuates its rule by systematically distorting the truth and continuously rewriting history to suit its own purposes. Smith has a love affair with a like-minded woman, but then they are both arrested by the Thought Police.

The ensuing imprisonment, torture, and reeducation of Smith are intended not merely to break him physically or make him submit but to root out his independent mental existence and his spiritual dignity until he can love only the figure he previously most hated: the apparent leader of the party, Big Brother. Smith’s surrender to the monstrous brainwashing techniques of his jailers is tragic enough, but the novel gains much of its power from the comprehensive rigour with which it extends the premises of totalitarianism to their logical end: the love of power and domination over others has acquired its perfected expression in the perpetual surveillance and omnipresent dishonesty of an unassailable and irresistible police state under whose rule every human virtue is slowly being suborned and extinguished. Orwell’s warning of the potential dangers of totalitarianism made a deep impression on his contemporaries and upon subsequent readers, and the book’s title and many of its coined words and phrases (“Big Brother is watching you,” “newspeak,” “doublethink”) became bywords for modern political abuses.

Orwell wrote the last pages of Nineteen Eighty-four in a remote house on the Hebridean island of Jura, which he had bought from the proceeds of Animal Farm. He worked between bouts of hospitalization for tuberculosis, of which he died in a London hospital in January 1950.

Under The Cover of ‘The Making of a Detective’