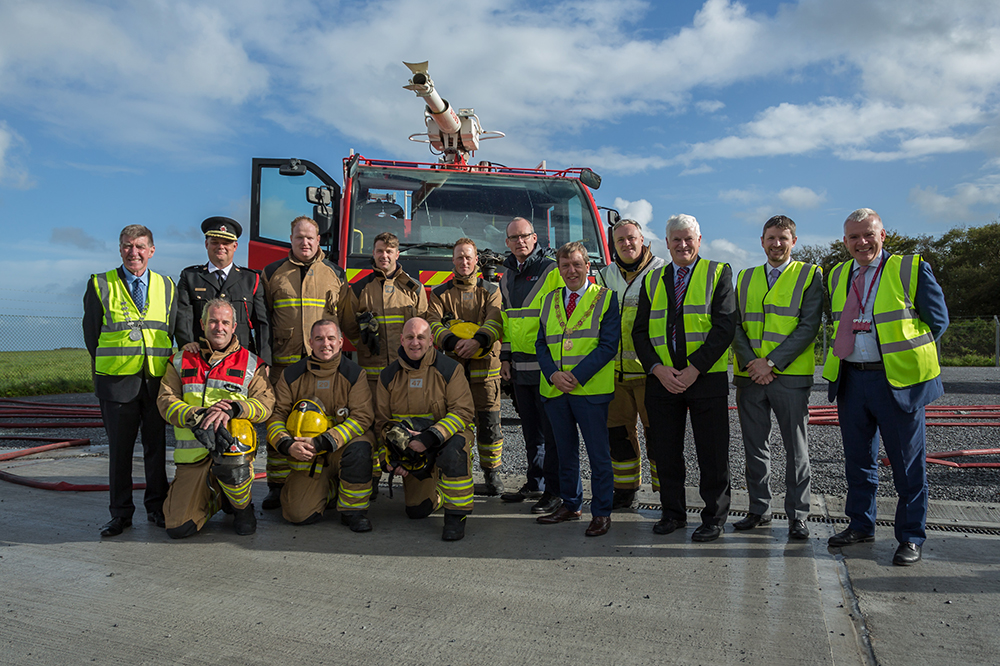 Cork Airport’s Fire Service will be better equipped to deal with emergency situations following the opening of a new €1.8m Fire Training Facility.

The new facility will provide the Fire & Rescue Services crew at the airport with access to world-class training, allowing for a variety of scenarios with various types of aircraft.

The facility was demonstrated as part of the opening ceremony with searingly hot fires in two types of airplane engine drawing gasps from the watching group as the fire team tackled the blazes.

Speaking at the opening, Chief Fire Officer Jim Johnson said: “We take great pride in the exceptionally high standards of safety at Cork Airport and work hard to ensure they are always maintained. Today’s opening of the new fire training ground further enhances our ability to deal effectively and safely with any situation that may arise.

“The aircraft simulator is designed to a high spec and incorporates several variations to ensure we are equipped to deal with any type of aircraft. The simulator is a dual fuel training rig that can be used for either clean gas burning fires or aviation fuel fires, which have a higher intensity and greater smoke plume. All anticipated scenarios are included within the design such as undercarriages, engine, fuel spill and internal cabin fires. It is a fantastic addition to our overall training and preparedness in the event of an incident,” he added.

Niall MacCarthy, Cork Airport’s Managing Director commented: “The Fire & Rescue Services crew plays a critical role in the safety of the operations and the new facility will ensure they have access to the best possible training scenarios. Today’s opening represents a significant investment by the airport to ensure optimum passenger comfort and safety.

The Fire Training Facility incorporates the latest design based on a hybrid aircraft training simulator, allowing for a variety of scenarios with various types of aircraft currently operating from Cork Airport. Crucially, the adaptable simulator also facilitates training around future aircraft to operate from the airport.

The training simulator was built by KIDDE Fire Trainers, who are a specialist aviation supplier, while the civil works on-site were completed by Ballincollig firm, HBS Construction.